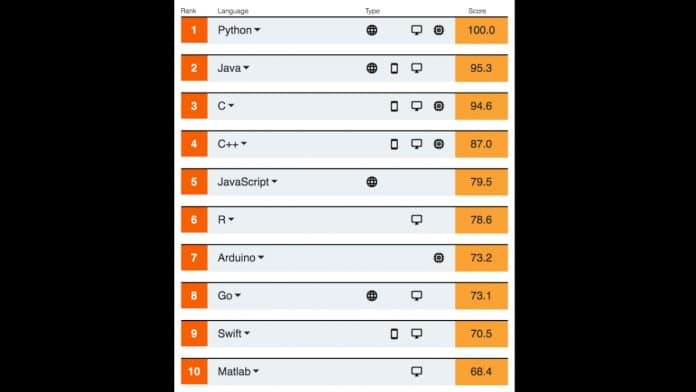 Python has once again dominated the top spot as the highly desirable coding language, according to the recently released list on top programming languages in 2020 by IEEE Spectrum.

For those unaware, IEEE Spectrum is the flagship magazine and website of the IEEE, the world’s largest professional organization devoted to engineering and the applied sciences.

The ranking was created by the IEEE Engineers by weighting and combining 11 metrics from eight sources such as Google Search, Google Trends, Twitter, GitHub, Stack Overflow, Reddit, Hacker News, and CareerBuilder to arrive at an overall ranking of language popularity.

“Since it’s impossible for even the most aggressive spy agency in the world to find out what language every single programmer uses when they sit down at their keyboards—especially the ones tapping away on retro computers or even programmable calculators—we rely on combining 11 metrics from online sources that we think are good proxies for the popularity of 55 languages,” wrote Stephen Cass, IEEE Spectrum senior editor.

According to the research group, Python topped the first position in the world’s most popular language ranking list for 2020 for the third time in a row (after 2018 and 2019), with Java, C, and C++ taking the second, third and fourth places respectively. Making its way to the fifth spot was JavaScript, which was replaced by R last year.

Top programming languages in 2020 according to IEEE:

“Our default ranking is weighted toward the interests of an IEEE member, and looking at the top entries, we see that Python has held onto its comfortable lead, with Java and C once again coming in second and third place, respectively. Arduino has seen a big jump, rising from 11th place to seventh. (Purists may argue that Arduino is not a language but rather a hardware platform that is programmed using a derivative of Wiring, which itself is derived from C/C++. But we have always taken a very pragmatic approach to our definition of “programming language,” and the reality is that when people are looking to use an Arduino-compatible microcontroller, they typically search for “Arduino code” or buy books about “Arduino programming,” not “Wiring code” or “C programming.”),” added Cass.

Why Is Python Still Ruling The Rankings?

According to IEEE Spectrum, one analysis of Python’s high ranking is due to its increasing use as a teaching language. Several students simply ask and search for answers to the same elementary questions over and over.

This movement was observed in the 1980s when there were books, magazines, and even TV programs devoted to the language. However, only a few programmers used it. When the home computer bubble burst, so did BASIC’s, although some advanced descendants like Microsoft Visual Basic are still relatively popular as they are used by professional programmers.

However, there are two counterarguments though. Firstly, the students that use programming languages are common users too. So, if attention is paid only to what professional and expert coders do, there is a risk of missing an important part of the picture. Secondly, unlike BASIC, Python is frequently used professionally and in high-profile realms, such as machine learning, which is due to its huge collection of high quality, specialized libraries.

While the entire world is affected by the COVID-19 pandemic, it hasn’t spared IEEE’s top programming languages rankings of 2020 either.

If we look at the Twitter metric alone in the interactive, one can see that COBOL is in seventh place. This is likely due to the fact that in April, Cobol was in the news because unemployment benefit systems in U.S. states were crashing under the load as workers were laid off due to lockdowns.

It turns out that many of these systems had not been significantly upgraded since they were created decades ago in COBOL. As a result, COBOL programmers were called to shore them up.