AMD’s next-generation EPYC server processor based on Zen 4 (codenamed Genoa) could support up to 128 cores and 256 threads in a single CPU socket, according to the latest rumors.

AMD Zen 4 is a significant increase from the existing Zen 3 architecture, which contains up to 64 cores. In other words, it is double than what AMD offers in its current EPYC 7003 line-up.

The following image shows the 64-core layout of the EPYC 7703 (AC) processor: 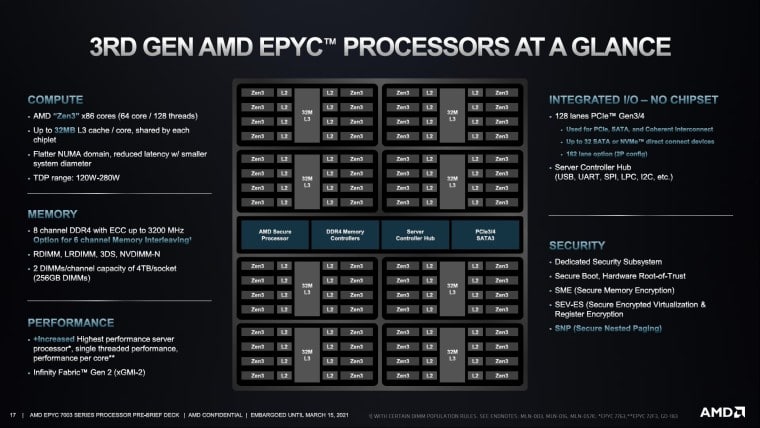 While previous reports suggested that AMD Zen 4-based processors will have over 64 cores, the new CPUs will now reportedly feature up to 128 internal cores and 256 threads, room for up to 16 CCDs powered by the Zen 4 core architecture as well as support 12-channel DDR5-5200 memory.

It will also include an expanded number of instruction sets, such as AVX-512, BFloat16, and others that are fundamental in areas such as high-performance computing (HPC) workloads, Internet of Things as well as server operations.

According to Dr. Ian Cutress of AnandTech, the power of these expanded instruction sets can be seen between an eight-core Rocket Lake-S and a 64-core Zen 2 EPYC processor in the 3D Particle Movement AVX-enabled benchmark.

As of now, AMD has not confirmed any information regarding the new Zen 4 hardware. Keep watching this space for more updates!