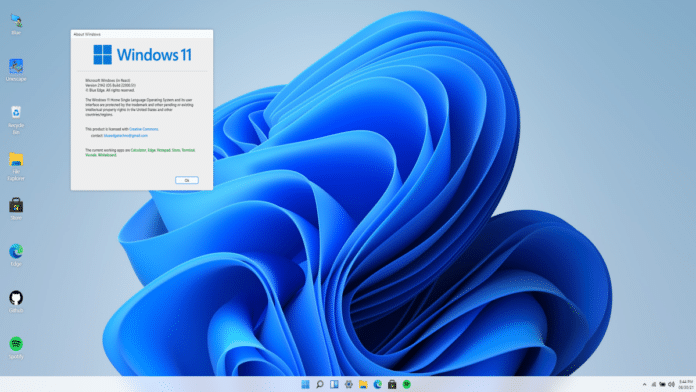 Want to experience Microsoft’s new upcoming operating system, Windows 11 without having to install it? Here’s how you can do it on a web browser.

Although Microsoft has already launched a beta version of Windows 11 for Windows Insider Program users under Beta and Dev channels, the full version of the OS will be rolled to Windows 10 users with compatible PCs later this year.

Now, a developer named Blue Edge has built an open-source web simulator for Windows 11 for those who are curious to try out Windows 11 within their browser without having to install or download the Windows 11 ISO. All you need is a browser and an internet connection.

The project called “Windows 11 in React” is available on GitHub. It is important to note that this isn’t the actual OS and rather a functional mock-up to give an interactive Windows 11 experience. However, the original version of the Windows 11 may deliver a different feel.

“This open source project is made in the hope to replicate the Windows 11 desktop experience on the web, using standard web technologies like React, CSS (SCSS), and Js,” says the developer on the GitHub project website.

According to the FAQ on the project’s GitHub, Blue Edge explained that the project took 2-3 days of collecting assets, 2-3 days of planning, and about 6 days of programming it.

Currently, the browser-based Windows 11 has an extensive list of features that a user can experience such as a functional Start, Menu, Desktop, Side Navigation, Calendar View, Window Snapping, Command Prompt, Calculator, Edge browser, Notepad, Store, Terminal, Vscode, and Whiteboard.

Further, the developer has plans to implement File Explorer, Drag and Resize windows, Start and Lock screen, Themes and Background, and other apps in the future.

Additionally, Blue Edge is also taking feature requests on GitHub that one thinks can be added to the project. All the contributor needs to do is open an issue, create a pull request, go to discussions or join the discord.

Do let us know if you are excited to try out the replica of the Windows 11 interface in the comments section below.