Solitaire is one of the oldest games in the world, having initially appeared on European shoes in the early 1700s. Since then, hundreds of different variations of the game have been invented due to its adoption by a diverse range of countries, cultures, and communities.

For the most part, solitaire (and the vast majority of its derivatives) are single-player games intended to put the player’s strategic thinking and problem-solving skills to the test. Almost every game type requires the player to sit down with a full deck of shuffled cards and rearrange them in a specific sequence while adhering to a rigorous set of rules governing what movements can and cannot be performed.

Interestingly, this emphasis on critical thinking and problem-solving has shown to provide the player with a wide range of brain-boosting benefits, including improved memory, stress and anxiety reduction, increases in neural plasticity, and even the prevention of diseases such as Alzheimer’s and dementia.

However, as any avid solitaire player will tell you, playing in real life has drawbacks. To begin with, the game can be time-consuming to set up, and if you alter the sequence of cards by accident or lose track of where you are, you may have to restart the game. Second, the rules of each variation can be difficult to learn, and if you make a mistake, no one will tell you where you went wrong.

Enter Solitaire Bliss – a free online solitaire platform with over 40 different game variants that can be accessed via various mobile devices. With its rich graphics and seamless gameplay, Solitaire Bliss has transformed the centuries-old pastime, giving it a much-needed digital makeover. On that note, let’s have a look at some of Solitaire Bliss’s key features, perks, and functionalities.

One of the first things you will notice when you reach the site is the large number of game variations that you can play – all for free, of course. Therefore, if you ever feel like you are getting bored with one game mode, you can always switch over to another to test out your skills.

For all you solitaire fans, you’ll be glad to know that all the best and most popular variants are available, including:

If you are unsure how to play each game mode, don’t worry. Solitaire Bliss offers easy-to-follow guides that take you through the basics of each game mode, so you can get up to speed with each one before you start getting competitive. They offer beginner, advanced, and expert guides, which means that no matter what your level, you are likely to find something valuable that will help you take your game to the next level. 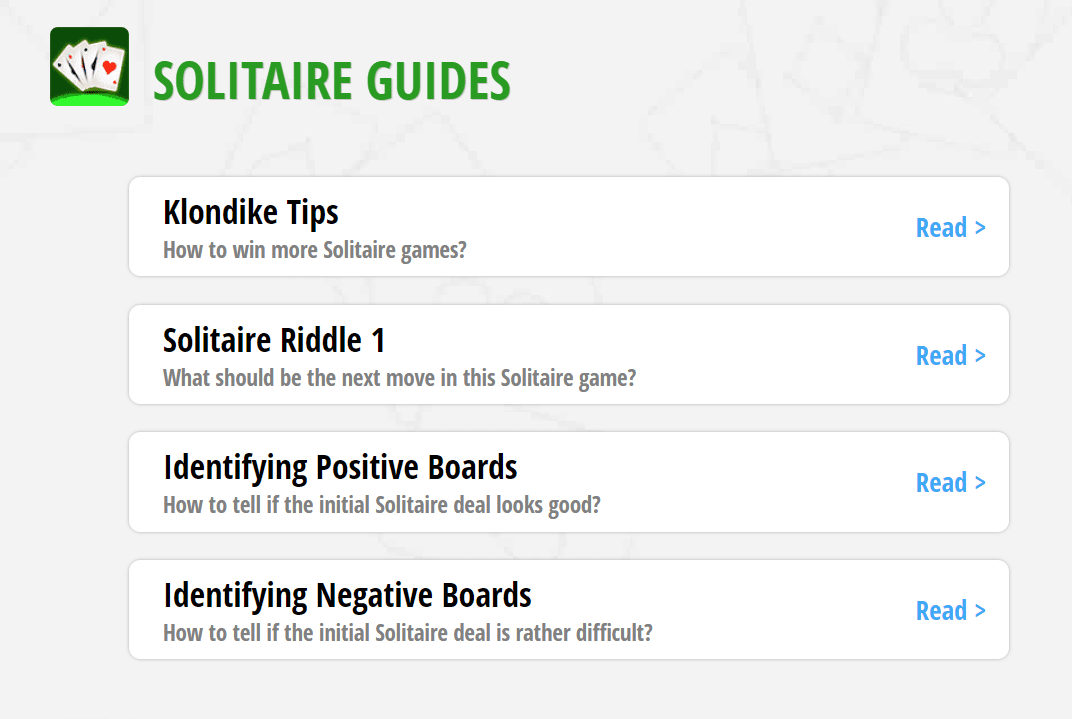 The gameplay experience is one of the key areas where online solitaire stands head and shoulders above its real-world counterpart. First, the site is extremely welcoming for beginners. After all, solitaire can be daunting to those who don’t understand the rules, and it can become incredibly frustrating and sometimes off-putting if you have no idea of the moves you should be making.

This is why Solitaire Bliss has a built-in “hint” feature incorporated into their games. The small lightbulb in the top left of your screen will highlight all moveable cards and show you the optimal move you should make each time you click it. Another super helpful feature is the “undo” button, which enables players to retrace their steps after making a mistake or realizing that they could have made a play slightly better.

There is also a timer at the bottom of your screen, accompanied by a move and score counter. This makes it easy for you to keep track of your progress and how well you are doing in each game. If you register for an account, the website will automatically keep track of these statistics to view and analyze your progress as you become a better player. 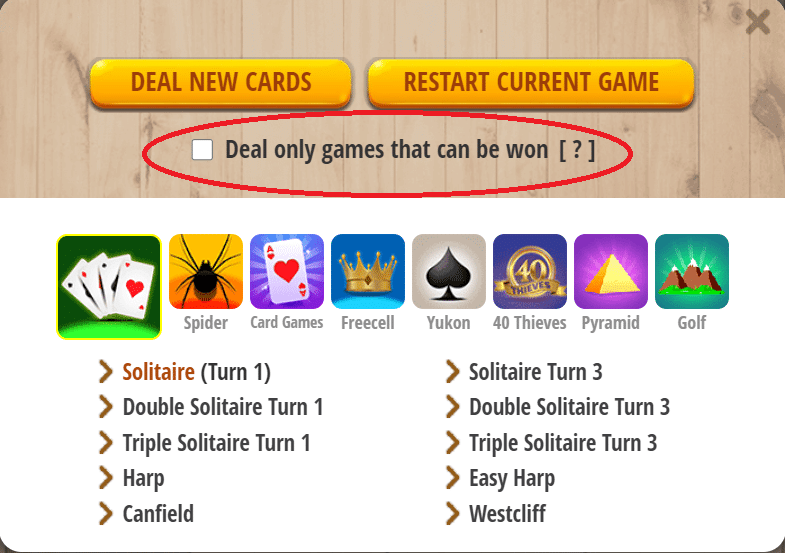 Finally, one of the standout features is the optional ability to only set up winnable games. For those of you that are unaware, solitaire is sometimes a game that you won’t be able to best no matter what you do. One in every five games is impossible to win, and there is no real way of knowing that until you reach the inevitable brick wall in the latter stages of the game. With Solitaire Bliss, this becomes a thing of the past. Simply ask the website to only deal games that can be won, and you will know that there is a possible route to victory. The rest is up to you.

Solitaire Bliss turns what was once a solitary game into something a little more social, thanks to its added competitive elements. Players can take part in daily challenges that stack them up against some of the best players in the world. For example, each game mode has a daily leaderboard that ranks players based on the time it took them to solve the game and the number of moves made. 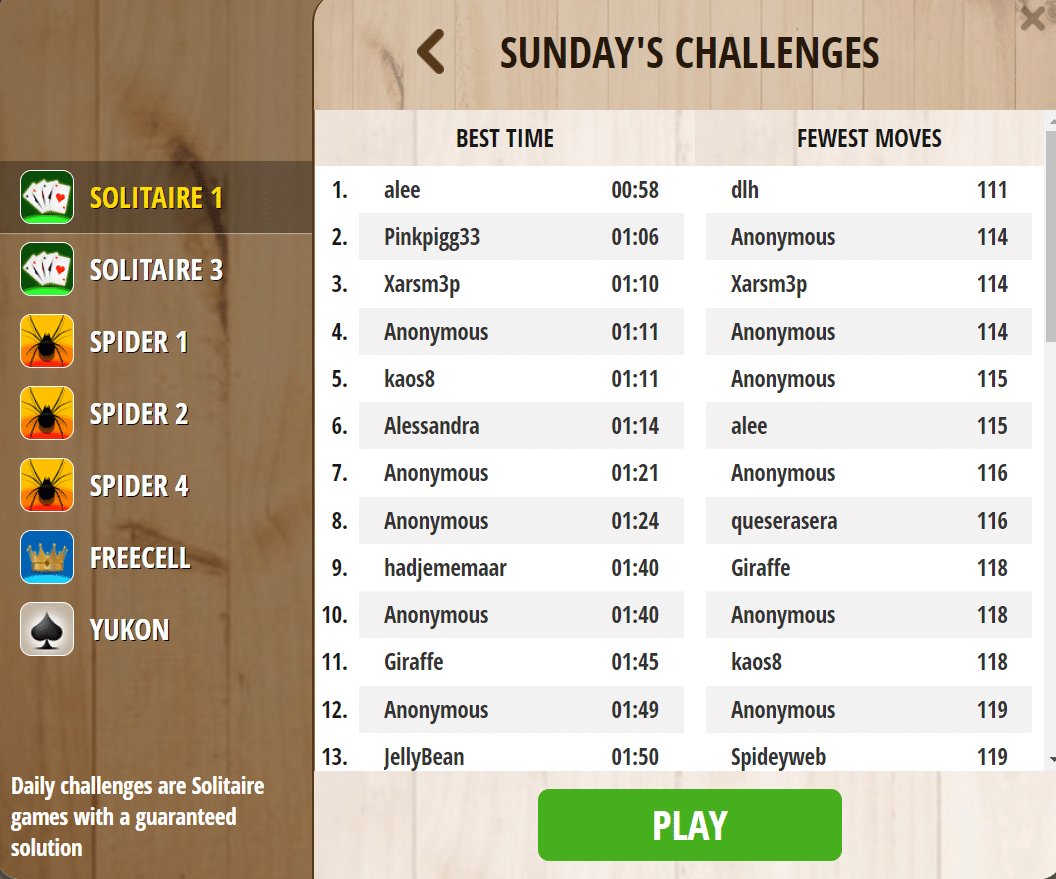 You can also bookmark and share your best games across all the major social platforms, just in case you want to brag to your friends about your new high score.

Solitaire Bliss has done an excellent job of giving one of the oldest and most popular card games around a digital makeover that brings it up to 21st century standards. With over 40 different game modes, added competitive elements, and a ton of gameplay features that bring out the best of this wildly popular game, Solitaire Bliss is hands down the best place to get your solitaire fix and test your mettle against thousands of players from all over the world.