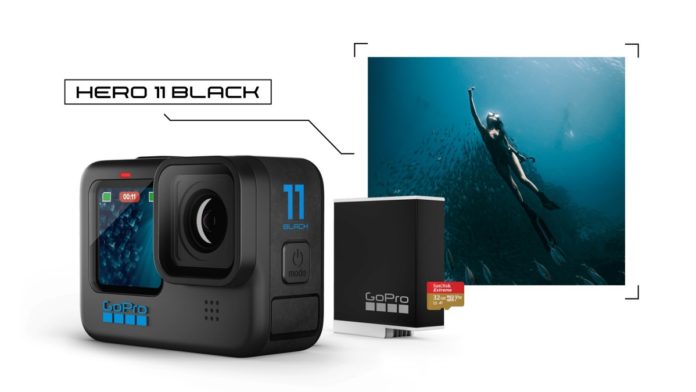 Starting with the design, the GoPro HERO11 Black is very similar to its predecessor, HERO10, and even uses the same colors. It still sports a 1.4-inch front display on the front and a 2.27-inch touchscreen display on the back and has a color LCD display on the rear.

However, it includes a new larger sensor measuring at 1/1.9 inches (versus a 1/2.3-inch sensor in the Hero 10 Black), which is capable of shooting 27MP still images and 24.7MP stills taken from videos. It also enables the camera to capture photos and videos in 10-bit color.

“This means you can now capture more of a scene vertically with the ability to crop for different aspect ratios in the GoPro Quik app—perfect for simultaneously creating extra-tall 9:16 vertical shots for Instagram and TikTok, plus high-resolution 16:9 cinematic shots ideal for YouTube or the big screen. You can also zoom in on the best sections of your videos to create high-resolution closeups,” says GoPro.

Further, the new sensor also enables HyperView, the widest 16:9 field of view ever native to a HERO camera, which is ideal for filming a first-person view of yourself biking, skiing, surfing, motorcycling, or similar activities.

Moreover, the HERO11 Black can shoot up to 5.3K videos at 60fps (frames per second) and supports 4k @ 120fps. Under the hood, it is powered by GoPro’s GP2 processor (same as last gen). The camera comes with a waterproof design of down up to 10m.

In addition, the flagship HERO11 Black comes with an advanced version of GoPro’s HyperSmooth 5.0 technology with an in-camera 360-degree Horizon Lock to keep the footage steady even if the camera rotates a full 360-degree during capture.

According to the company, GoPro Subscription, its paid cloud backup service, will now send you automatic highlight videos to your phone after footage from the Hero 11 Black is auto-uploaded to the cloud.

The HERO11 Black is powered by a removable 1,720mAh Li-ion battery and supports Type-C charging. GoPro is now offering Enduro Battery by default for HERO11 Black, which according to the company, is said to dramatically improve camera performance in cold and moderate temperatures, by extending battery life up to 38 percent.

The GoPro Hero 11 Black Mini is a smaller, lighter, simpler version of HERO11 Black that features all of the performance of its bigger sibling. It measures 52.4 x 51.2 x 38mm and weighs only 133 grams.

This action camera has no touch displays on the front or back, which means the action camera has to be completely controlled from your phone or using the button on the front. It only has a tiny display at the top, next to the shutter button, which shows the video capture mode, battery life, and other information.

Further, the camera comes with dual mounting fingers on the bottom and rear of the camera to give you more options for the perfect low-profile setup. It also comes with a new large image sensor with an 8:7 aspect ratio and can shoot up to 55.3K videos at 60fps as well as capture 24.7MP photos.

GoPro says HERO11 Black Mini is entirely wrapped in a tough outer shell, which makes it one of the most durable GoPro cameras. The action camera is powered by GoPro’s GP2 processor and has a non-removable 1,500mAh Enduro Li-ion battery.

HERO11 Black is available globally for purchase at $399.98 for GoPro Subscribers and for $499.99 without a GoPro subscription.

On the other hand, HERO11 Black Mini will be available from October 25 at GoPro.com for $299.98 for GoPro Subscribers and for $399.99 without the subscription, rolling out to retailers globally thereafter.