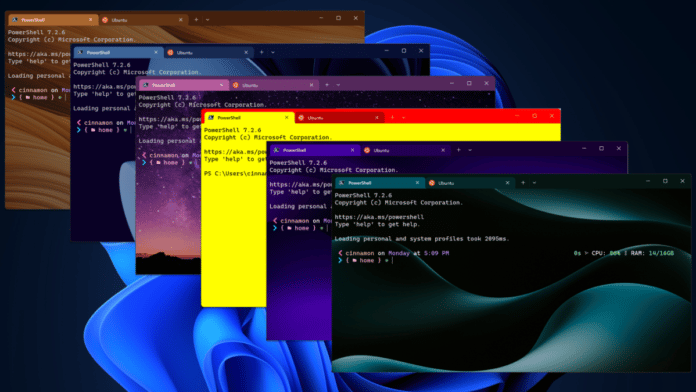 Microsoft on Wednesday announced that it updated the preview version of Windows Terminal to version 1.16, which contains a number of new features to explore.

To start with, Microsoft has added more customization possibilities with the introduction of global property for themes. You can modify themes by editing the Windows Terminal global JSON settings file. You can also customize tabs, tab rows, and windows and select between light and dark terminal window themes.

“themes is a global property that can contain a variety of themes objects, which will appear in the Theme dropdown on the Appearance page of the settings UI,” explained Kayla Cinnamon, Program Manager II of Windows Terminal in a blog post.

“Themes are only editable using the JSON file, but they will appear in the Theme dropdown in the settings UI.”

The new version has also modified some of the default colors of Windows Terminal “for a more cohesive appearance”. Further, the terminal app will now use a dark theme as the default theme, rather than following the default Windows system theme.

Moving further, the new text rendering engine that was introduced with Windows Terminal Preview 1.13 is now the default text renderer for all profiles. The new renderer is more performant and now supports additional pixel shaders (including the retro effect), bold text, and underline/overline/hyperlink lines.

Moreover, if your machine or the virtual machine that you are remoting on doesn’t have a GPU, it will automatically switch to a more performant mode that doesn’t require hardware support.

Other changes include the ability to set where new tabs open such as at the end of all of your tabs, or after the currently selected tab. It also includes expanding the selection to a word by modifying the JSON file.

Besides the above, the release also includes the following improvements and bug fixes:

You can download and install Windows Terminal 1.15 (v1.15.252) and Windows Terminal Preview 1.16 (v1.16.252) either from the Microsoft Store, the GitHub releases page, or Windows Package Manager (winget).