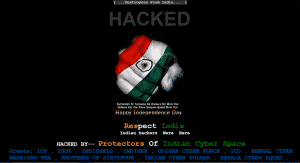 About 6596 Websites of Pakistan was hacked by Indian Hackers, On the eve of Independence day of India.

The list of websites hacked with their mirror can be seen from the paste below:

Also the website of  Pakistan  telecom (www.ptcl.com.pk/) was down for the whole day.

Many of The Cyber security Team and experts says- The cyber war has been won by India for sure..