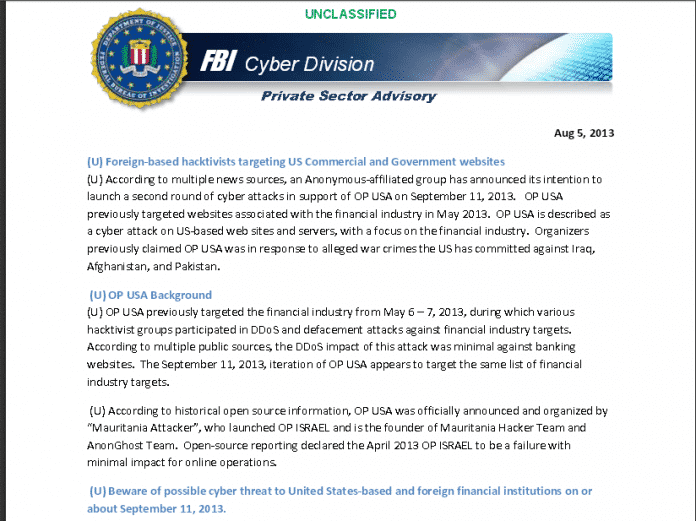 A recent Unclassified document fro Cyber Division of FBI warns, Financial Institutions from Israel, USA and Many other Countries having collaboration with Israel.

In early August This year Anonghost Announced #OpIsraelReb0rn set on 9/11. and asked Muslim hackers around the world to support them, within no time many hacker groups from around the world joined the campaign.

A recent document from FBI, warns financial Institutions from Israel and USA, to take reasonable steps to secure their cyber infrastructure, in light to the expected Cyber Attack on 9/11.

In Fact, from fast few days ‘#OpIsraelReb0rn’ is in its full pace, More and More hacker teams are joining day by day and preparing for the final attack.

Some of the teams that are joining for the Attack, #OpIsraelReb0rn:
AnonGhost, Fallaga Team, Anonymous Arabic, Moroccan Agent secret, Afghan Cyber Army and many others.

Yesterday in A leak, Few Credit card details from Israel was leaked by Anonghost:

It was a very small leak of all credit card details they have compromised, the full details will be leaked on final day of #OpIsraelReb0rn, on 9/11.

In addition to Credit card in an Another leak, 165000 Israeli emails were hacked and leaked by AnonGhost

More and more leaks and hacks are being carried by The joint Forces of #OpIsraelReb0rn, and it is expected to be a serious threat on final day of the operation.