The Gear with a 1.63 inch super AMOLED panel can act as an extension to market leading Galaxy  Smartphones, With the look of a Smart spy watch on your wrist.

“It’s a companion device that will keep us constantly connected,” Samsung Executive Vice President of Marketing, Lee Young-hee told reporters in Seoul ahead of the smart watch’s launch. Her remarks had been embargoed until Wednesday.
“It will increase user experience with the Galaxy Note 3 and with this, we aim to create a new lifestyle trend, initially targeting young trend-setters and style icons.”

The super spy like look device, allows hands-free calling, text messages , emails, snap photos, record videos and access to social Networks like twitter, without taking out Synced galaxy smartphone from your pocket or handbag. The Smart watch will be connected with its Synced galaxy device via wireless Bluetooth technology. 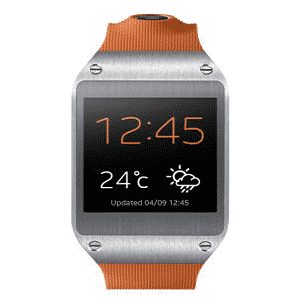 Special features, and working:
The Galaxy watch synced with Galaxy Smartphone, can be used for voice chat, with holding your hand up to your ear. Features can be accessed by voice commands. In addition to voice call, user can send text messages, check the weather, set appointments on calender with S-Voice.

Security feature: The screen is locked Automatically, if the gear is moved more than 1.5 meters away from its synced device. In case your Synced Galaxy Smartphone is missing, the gear will make the device light up and beep.

The Galaxy gear will be Available Around September 25, priced at about 299$.