TechWorm
Home Announcement
Facebook
Twitter
Pinterest
WhatsApp
In what is the first major hacking incident of the year 2014, cyber criminals on January 16th breached the computers of the European telecom giants ‘Orange’ and hacked the system.  The hackers used the My , cybercriminals hacked into the systems of telecoms giant Orange. The attackers targeted the ‘My Account’ section of the orange.fr website to gain sensitive information about the Orange subscribers in France.

The accounts of nearly 800,000 French citizens may have been compromised by this attack according to Security Analyst, PC INpact.  It said that the hackers have gained access to names, mailing addresses, email addresses, phone numbers and other information.    Orange which came out with a presser accepted that data of nearly 800,000 individuals may have compromised and added that the compromised data accounted for less than  less than 3% of their customer base is impacted by the attack.  Orange sent out the following email to all its subscribers informing them of the attack : 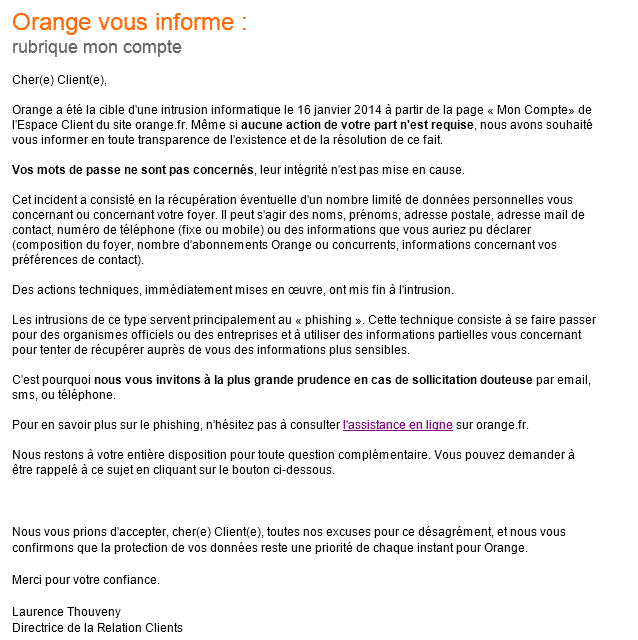 The web security engineers at Orange swiftly swung into action after detecting the attack and disabled and shut down the My Accounts page to subscribers.  Orange Technical Director Laurent Benatar has clarified that no passwords have not been compromised and the hackers may have got some financial information from the data they stole.  However Orange couldnt exactly specify what data could have been leaked and available in the hands of hackers. Because on one hand Benatar confirmed that some partial financial data may have been compromised, but on the other hand he said that that sensitive data such as bank account numbers are redacted, the full versions being stored on separate servers that haven’t been impacted by this breach.
Only days after the hacking, Orange had sent out a cautionary email to all its subscribers regarding phishing emails but had not acknowledged any breach in that email. The stock price of Orange (ticker ORA) was down to 9 Euros on the news of the breach but later recovered to close at 9.11 Euros after assurances from the French Telecom major.