TechWorm
Home Hacking News
Facebook
Twitter
Pinterest
WhatsApp
Pro Assad Syrian forces recent successes against the rebels on ground have emboldened the notoriously pro Assad cyber army, the Syrian Electronic Army.  Yesterday, the Assad military forces were able to take control of key border town of Yabroud from rebel forces.  The Syrian Electronic Army has simultaneously breached and defaced the official website of the National Coalition for Syrian Revolutionary and Opposition Forces > etilaf.org. A number of other sites related to the organization have also been targeted. 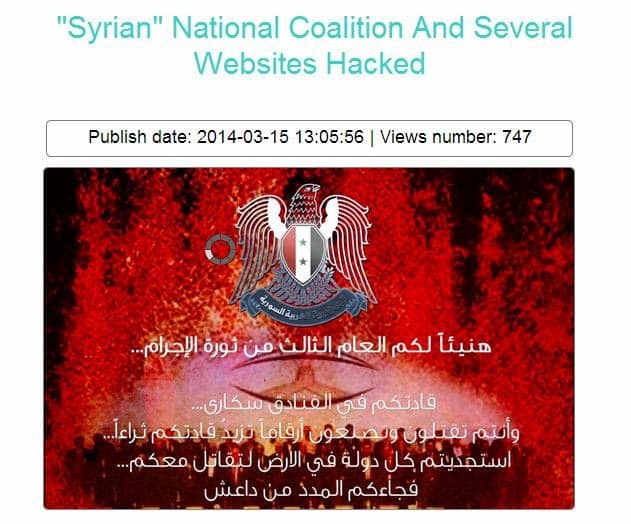 The SEA is operating on two fronts now, against the pro-Assad rebels on one hand and against the western targets it believes are helping the rebels with military and other handouts. The National Coalition for Syrian Revolutionary and Opposition Forces which is also known as the Syrian National Coalition is one such coalition formed to organise all anti Assad rebels under a single umbrella organisation. It receives aid and military hardware from the US, UK and Saudi Arabia.
In addition to the organization’s website, Syrian Electronic Army has also defaced the website of Masarat Syria > masaratsyria.com and the City Council of Daraya  > darayacouncil.org.
The Syrian Electronic Army has also posted a tweet on its Twitter page saying that it will now leak and reveal the payments Microsoft receives from the US Government to take part in the PRISM program of the NSA.  This documents are probably a part of the hack SEA did on Microsoft in month of February 2014.

How much does @Microsoft charge @FBIPressOffice ever month to spy on your emails? Stay tuned for their leaked documents. #SEA #PRISM
— SyrianElectronicArmy (@Official_SEA16) March 16, 2014

If you remember, on Friday, SEA had hacked and breached the US Central Command CENTCOM AKO servers and has promised to leak classified documents to prove that they have indeed been able the breach the main CENTCOM server.  They claims of a major breach in US Military servers were pooh poohed after releasing the image of AKO servers by the CENTCOM officials, saying these were just unclassified documents. “SEA advises the terrorist Obama to think very hard before attempting ‘cyberattacks’ on Syria. We know what Obama is planning and we will soon make him understand that we can respond,” SEA had tweeted on 28th February, 2014

At the time of writing this article all the three websites are down. A mirror of the National Coalition site defacement is available on zone-h.org.  techworm will bring you latest news about the Microsoft leaks as and when they happen.