TechWorm
Home Hacking News
Facebook
Twitter
Pinterest
WhatsApp
The hacker going by the handle of Ethical Spectrum has defaced the official websites of Britney Spears, Miley Cyrus, Selena Gomez, Taylor Swift, Chelsea Handler and Nicki Minaz.  It seems that Ethical Spectrum had been targeting the websites of Hollywood VIPs since 8th March, 2014 and was fully successful today.  The meme that appeared before the shut-down-for-maintenance webpage is given below

Ethical Spectrum who came into the limelight when he managed to hack into the systems of Finnish game developer Supercell by first hacking into the email account of an Supercell employee and then hacking Supercell’s Facebook page.  Supercell is the publisher of very popular mobile games like Hayday and Clash of Clans. Coincidently today is exact one month anniversary after hacking of Supercell.  Though all the actors listed above have managed to revert there web page to ‘ Shut Down For Maintenance’ Ethical Spectrum had posted a picture of meme characters dancing, along with the message
“Hacked. For more security, [email protected]”
https://twitter.com/Eth_Spectrum
It is apparent that Ethical Spectrum was targeting the security service of the service provider (website maker) for these Hollywood stars. One of the sites had a message in which he blames Greg Patterson – the COO and co-founder of ground(ctrl), a company that specializes in creating websites for artists – for the attack.
It is reported that Ethical Spectrum had approached the service provider to secure these very websites for a fee but he was spurned by ground(ctrl).  The after effects of the spurning are for all to see. Ethical Spectrum didnt take kindly to the ground(ctrl)’s rejection of his offer and breached the company’s systems, he could easily gain access to the sites they’ve created. The ground(ctrl)’s official website is also down as of now. 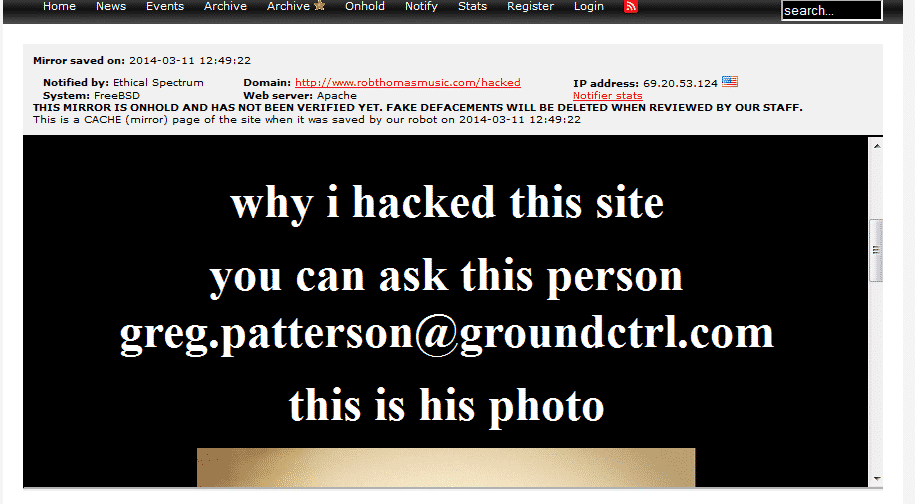 Incidentally at the time of writing, many more hollywood personalities websites are being added to the already growing list and by nightfall this may be the biggest hacking yet on hollywood stars.

Update : It seems the Hollywood stars have recovered from their nightmares.