TechWorm
Home Security news
Facebook
Twitter
Pinterest
WhatsApp
Anonymous Chile yesterday announced the launch of a new operation called #OpCencosud to bring the world attention to the plight of ordinary Chileans due to alleged illegal profiteering during the Chile’s recent twin calamities of earthquake and fire. Cencosud S.A. is a publicly traded multinational retail company with majority of its operations in Chile, Brazil etc.  It has around 1000 stores in Latin America and is the largest retail company in Chile and the third largest retail company in whole of Latin America just behind Brazilian Grupo Pão de Açúcar and the Mexican Walmart de México y Centroamérica. 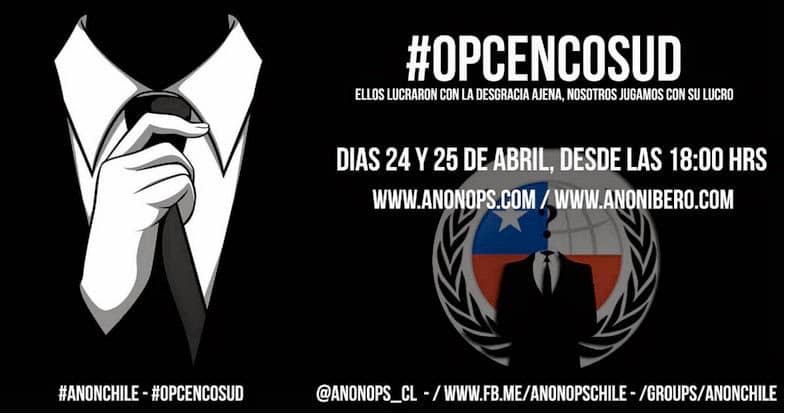 Anonymous Chile has said in a presser released on Pastebin that Chile has undergone two major calamities in recent times.  One is the power earthquake of 8.2 magnitude that hit the northern coast of Chile on 1st April, 2014.   The second calamity that hit Chile was the recent fire hitting the Valpariso killing atleast a dozen citizens and destroying homes of about 10,000 Chileans.
Anonymous allege that despite Cencosud being the largest retailer in Chile and helping out the citizens, it embarked on a alleged profiteering spree to extend its margins by taking advantage of the mishaps and misfortunes of Chilean citizens.  Anonymous has set the date of 24th and 25th April, 2014 for the #OpCencosud and called on all the Anonymous fraternity to participate in the operation.
Anonymous has prepared a three pronged roadmap to attack Cencosud.  On its paste, it gives the modus operandi for the attack as follows :

Phase 1:-Mainly we appeal to any person who relies on this consortium go to other stores that are not related to the set already named, they want profit but without us giving them what they want, talk about money, not be profit. Step 2: On the attack-send condemnation of those situations which are related undertakings involved Cencosud, the idea is to saturate their social networks via spam. Phase 3:-The days of the attack will be released Websites to be attacked on grounds of not providing more information about this consortium, at the time of the demonstration, which is 18:00 hrs (time Chilena), more information will be given through our social network