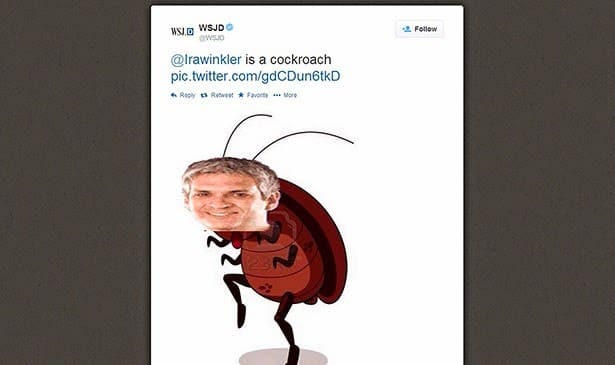 On Tuesday, the hacked @WSJD account tweeted the photo of Ira Winkler’s head placed on the body of a cockroach. with a short statement saying “@Irawinkler is a cockroach.

In an email to Poynter, Wall Street Journal spokesperson Colleen Schwartz says “We believe the @WSJD, @WSJEurope, @WSJAfrica, @WSJVintage Twitter accounts have been compromised,” and that the Journal is “still investigating.”

The journal said on Twitter that few of its Twitter Accounts was hijacked yesterday, and they have secured the hijacked accounts and now are purportedly working normal.

We are aware some of our Twitter accounts may have been compromised. We are looking into it.
— Wall Street Journal (@WSJ) May 6, 2014

We have secured our compromised Twitter accounts and they are now functioning normally.
— Wall Street Journal (@WSJ) May 6, 2014

Winkler in an interview to CNNMoney had stated that “this latest attack is another sign the SEA isn’t very talented and aims for low-hanging fruit. They usually worm their way into corporate networks using simple spear phishing attacks”. “These guys are imbeciles,” “They’re a bunch of 20-something, minimally technical people with too much time on their hands and money from the Syrian intelligence services. They’re more ants than cockroaches.” he said.

This is the second attack since Winklers statement about SEA. In view of the SEA’s threats that RSA and other security firms should expect 3 attacks we can expect the Syrian Electronic Army working behind the scenes to attack/hack or compromise some high profile entity, to fulfill its threats