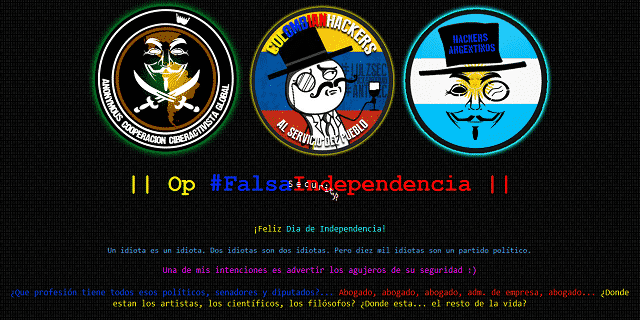 Team of three of the pro hacker groups has united and launched a cyber attack over the Colombian Government.

The Operation is organised on 20 July, Independence Day in Colombia. the Goal behind the operation is to attack the servers of the Colombian Government, said Max_Hcz fonder of team Anonymous GCC. this year Anonymous CCG, Colombian Hackers & Team Hack Argentino are united for the operation, he added.

One of the hacked website carried a deface message,

Happy Independence Day.
An idiot is an idiot. Two idiots are two idiots. But ten thousand idiots are a political party. One of my intentions is to warn security holes. What profession has all these senators, politicians and deputies? lawyer, attorney, advocate, adm. Company lawyer … Where are the philosophers, artists, where is the rest of life?

The operation has just started, So more websites are expected to be hacked as the Operation continues for entire day.

At the time of writing the article all the websites carried the deface page.