TechWorm
Home Security news
Facebook
Twitter
Pinterest
WhatsApp
A website user looking for clean content is often blasted with pop-ups which  only irritate him.  For ages pop-up advertisements seem to have been irritating users online. Now the man responsible for creating the code that ushered in an age of internet ‘whack-a-mole’ is apologizing for the lack of privacy he brought about.  Ethan Zuckerman, director of the Centre for Civic Media at MIT who wrote the code to launch a window outside of a browser, now known as Pop-up and run a advertisement on it has written a longish essay apologizing for the same. 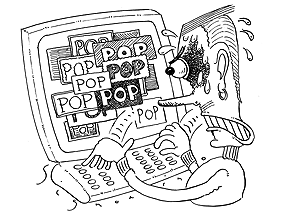 Writing on The Atlantic, Zuckerman said, “I wrote the code to launch the window and run an ad in it. I’m sorry. Our intentions were good.”
“Not only did I deploy what was probably the first popup, I wrote the javascript and the server-side Perl to launch it,” Zuckerman told the magazine’s Adrienne LaFrance in a follow-up. “I’m old.”
Ethan who is a  former designer and programmer for Tripod.com said that he is not just apologizing for the annoyance of the pop-ups or how the ad-based business model came to dominate the internet. What he’s really expressing remorse for is the online surveillance and lack of privacy that the business model has brought about.   He used his essay to blast internet and tech biggies like Facebook founder, Zuckerberg, Larry Page and Sergey Brin of Google for using it to intrude on user privacy.
“The internet spies at us at every twist and turn not because Zuckerberg, Brin, and Page are scheming, sinister masterminds, but due to good intentions gone awry,” he wrote.
Google targets users based on their search algorithms and Facebook targets users based on the sheer volume of visitors to Facebook as per Zuckerman.  This lets these big techies pry on individual privacy under the garb of ads he added, “Demonstrating that you’re going to target more and better than Facebook requires moving deeper into the world of surveillance—tracking users’ mobile devices as they move through the physical world, assembling more complex user profiles by trading information between data brokers.”
His essay seems to have found resonance among many web users. Here is a tweet for one of the web users, who thanked him for apologising and asked when Zuckerman will be targeting @Slate

@ethanz You apologized for the popup ad on @TheAtlantic, which has the most invasive ads ever seen. @Slate next time? pic.twitter.com/aDk0LWndBL
— Collin Sebastian (@CollinSebastian) August 16, 2014