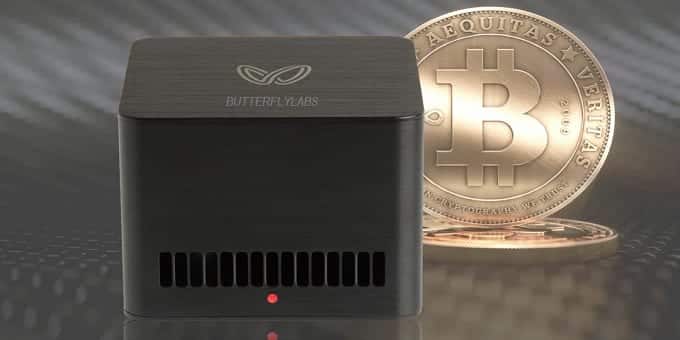 In a complaint filed earlier this month, the FTC alleged that the Butterfly Labs charged consumers thousands of dollars for computers that mine Bitcoins but then failed to deliver the machines “until they were practically useless, or in many cases, did not provide the computers at all,” the agency said in a statement Tuesday.

Bitcoin as we know them are of limited supply and have to be mined.  Bitcoin mining requires top quality hardware with energy guzzling and resource-intensive computing machines which can do fast math calculations.  The amount of bitcoins possible to be mined is capped at 21 million and around 13.3 million bitcoins have been mined and are in circulation.

The bitcoins are mined in a block which is listed in a ledger called Blockchain. When a block is discovered after solving complex mathematical problems , the miners of that block is awarded a bount may award themselves a certain number of bitcoins, which is agreed-upon by everyone in the network. Currently this bounty is 25 bitcoins; this value will halve every 210,000 blocks.  Additionally the miners also given fees by the blockchain users.  The fees are a premium which the miner makes and are bound to increase as the bitcoins get rarer to mine and require more complex hardware.

Butterfly apparently used unfair means to convince its buyers that it was delivering machines branded as ‘BitForce’ capable of performing complex operations.  And at a price!  Priced at $29,899.00 these machines were never delivered to the customers who placed orders. Some of machines that were delivered never worked, said the FTC filing.

As of September 2013 Butterfly allegedly took  more than 20,000 orders for the BitForce alongwith the payment and did not fulfilled any commitments.

In August 2013 the company came out with a new scheme and a new computer called the Monarch which it priced at $4,680.00 and started taking orders through same tactics, but only delivered a few according to FTC.

The lure of mining bitcoins easily get to the most conservative users and this is the honeytrap that companies like Butterfly Labs lay out.  The mysteriousness, hype and the exchange price of Bitcoins (current price $432.19 per bitcoin) acts as an additional incentive for victims to fall lure to such kind of advertising and fall prey.

“We often see that when a new and little-understood opportunity like bitcoin presents itself, scammers will find ways to capitalize on the public’s excitement and interest,” Jessica Rich, director of the FTC’s Bureau of Consumer Protection, said in a statement. “We’re pleased the court granted our request to halt this operation, and we look forward to putting the company’s ill-gotten gains back in the hands of consumers.”

“Even where Butterfly Labs did deliver a Bitcoin mining computer to a consumer, the complaint notes that because of the unique nature of the Bitcoin system, the outdated computers were useless for their intended purpose,” the FTC said, indicating that a company representative said the passage of time had rendered some machines as effective as a “room heater.”

Butterfly Labs said that the FTC action was one sided and arbitrary,  “In a rush to judgment, the FTC has acted as judge, jury and executioner, contrary to our intended system of governmental checks and balances,” the company said in a statement. “Butterfly Labs is being portrayed by the FTC as a bogus and fake company. To the contrary, Butterfly Labs is very real.”