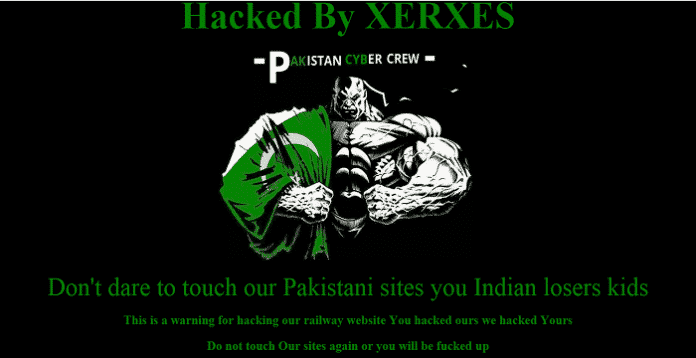 The official website of Ministry of Railways of India was hacked today by Pakistani hacker operating under the online handle “XERXES”.

The hack came in response to the Hacking of official portal of Railway of Pakistan (pakrail.com/) by Indian hackers a few days back. “XERXES” who is also a member of the Pakistan Cyber Crew.  The hackers left a deface page on the entire server, defacing altogether 46 subdomains of the website of Ministry of Railway of India.

Don’t dare to touch our Pakistani sites you Indian losers kids This is a warning for hacking our railway website You hacked ours we hacked Yours Do not touch Our sites again or you will be fucked up TeaM Pakistan Cyber Crew Was Here  Feel The Power Of Pakistan  Pakistan Zindabad, the message on the deface page read.

List of SubDomains defaced can be seen from the paste released by the hacker from below:

The hacker told Techworm that the vulnerability which he exploited is present several months in one of the subdomains of the portal, he also added that he was able to dump data of railway employees.

Most of these are zonal websites of the Ministry of Indian Railways of Government of India.  They are used by Indian railway for there zonal, manufacturing units, research and knowledge websites.  The website serving the Western Zone includes the rail network of city of Mumbai for its Western Railway suburban network and is used by majority of Mumbaikars and gets around ten thousand views daily. However, the main ticketing and reservation website operated by IRCTC which has not been hacked.  The IRCTC website handles a daily traffic of about 120,000 concurrent connections on web servers and can book about 2000 tickets per minute and gets upto a million visitors a day. Any attempts to Hack IRCTC website would have caused major disruption in the railways ticketing and reservation system and loss of millions to the Indian Government.

Indo-Pak Cyber war have always been a big trouble for both the Governments with both hacker communities targeting each others national websites.  The Indo-Pak relations have always been a bit rancid since their independence and the cyber wars are the new face of this bitterness.  With no thaw in sight with regard to the Indo-Pack relationship, the ongoing Cyber war does not look to be ending soon.

The websites are still showing the deface page at the time of writing this article.