Taking opportunity of the frantic binge shopping of US, Canadian and European customers on Thanksgiving today, popularly called the Black Friday sale, some vendors are shipping ultra cheap Android tablets with major security flaws.  A security firm, BlueBox Labs has revealed through its research that many retailers are shipping Android tablets full of security loopholes which can put the Android user at severe security risk.

Bluebox Labs purchased over a dozen of these Black Friday “bargain” Android tablets from big name retailers like Best Buy, Walmart, Target, Kmart, Kohl’s and Staples, and reviewed each of them for security. What we found was shocking: most of the devices ship with vulnerabilities and security misconfigurations; a few even include security backdoors. What seemed like great bargains turned out to be big security concerns. Unfortunately, unsuspecting consumers who purchase and use these devices will be putting their mobile data & passwords at risk.

The security researcher have also published a detailed graphic of the retailers and Android tablets which is given below : 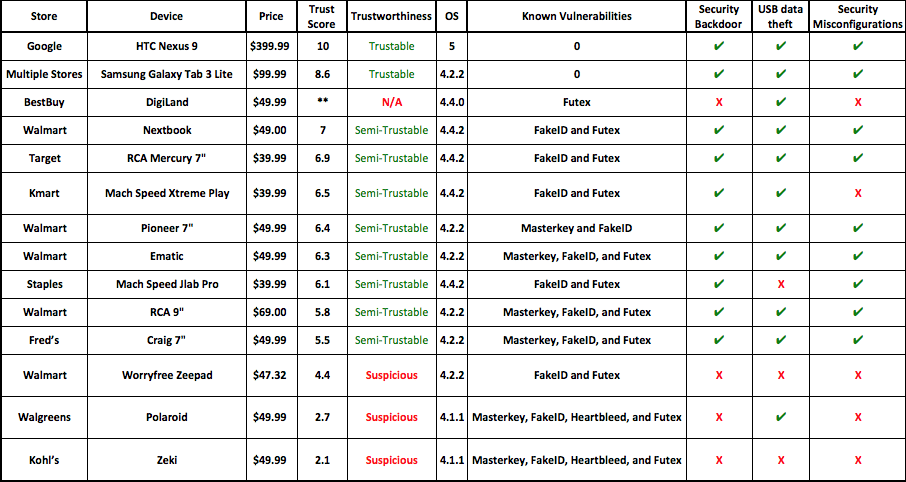 The interesting thing that comes to notice is that even big retailers like Walmart, Walgreens and Kohl have fallen prey to greed and are shipping tablets which are obviously serious security risk. The Android tablets they are shipping come from unknown manufacturers, and it’s likely most of us have never even heard of them prior to this post.

According to a list of devices provided by Bluebox Labs, the following devices are not to be trusted, as they come with vulnerabilities out of the box:

Bluebox and we advise buyers to be wary of such cheap deals and not to fall prey to the Black Friday binge spending.  If you intend to buy these ultra cheap Android tablets make sure that you use them for “low-risk activities like simple gaming, media entertainment, and public web browsing.”

Maybe a case of bottomline coming before the buyers security!!