Hackers claim to have all information about all citizens in Serbia

It seems that identities of almost all Serbians are at the risk of their personal information being leaked or used for malicious intent as a result of a hack on Serbian State’s network.  Five hackers have claimed that they hacked in the internet backbone of the Serbian Identity system and stolen ID numbers of almost all citizens of Serbia.  Though the has not been confirmed by the Serbian authorities, the hackers have leaked a screenshot of what seems to be details of Serbian citizens.

As per InSerbia, the hackers have sent a email to  the largest Serbian daily, Blic.  In the email the hackers have claimed, “We have whole Serbia in our hand. We have almost all information about the Serbian citizens starting from ID numbers to what they do, where they work, live, their phone numbers”. 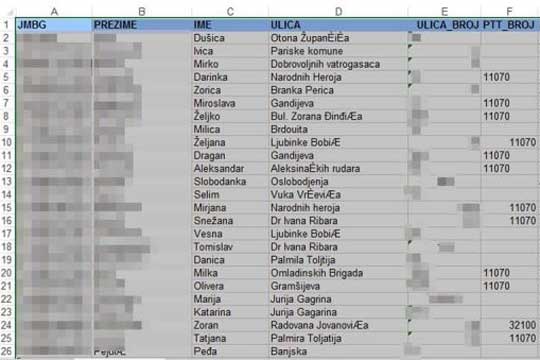 The above said screenshot contain tables was attached with the email sent to Blic to substantiate their claim.  The tables apparently contain detailed information about residents of several cities in Serbia. “We show this information in public for many reasons. The first and main reason is that our cyber police chases exclusively Serbian hackers while it ignores Albanian hackers. Now they will have more than specific reason to look for us, but they will waste their time,” the e-mail reads.

The hackers seems to sound patriotic and make it sound like the hack was done to show the state authorities about the apparent weaknesses in the Serbian cyber system.  “The third reason is that the state sees, and after multiple warnings realizes, that the security of the system is weak and that they should take more care about it,” the e-mail reads.

If this hack attack on Serbian state system is proved  to be true than the affects of the data being in cyber criminals hands will be devastating for the Serbian citizens. This data could be used by the hackers for anything and everything malicious.  The Government of Serbia has neither confirmed or denied the hack and with very less information coming out of Serbia in English, it is hard to determine whether the hackers claims are true or not.