The website which cloned the top British news website BBC and incidentally had a similar domain name was discovered to be serving a bogus story about the Chalie Hebdo incident.  The website which was hosted on bbc-news[.]co[.]uk looked the exact replica of BBC website and ran a story questioning the authenticity of the footage of the fatal shooting of a Muslim police officer shortly after the alleged ISIS backed terrorists had killed 12 people at Charlie Hebdo office in Paris.

The site which was analysed by OpenDNS because of the unusual spike in visitors was found to be serving a bogus story which apparently questioned the authenticity of the video footage.

40 year old Ahmed Merabet was one of two police officers killed in the Jan. 7 terrorist attack on the satirical magazine Charlie Hebdo. Merabet spotted suspected attackers Said and Cherif Kouachi fleeing the scene and pursued them. He was taken down by gunfire and then shot point blank on the street. Officer Franck Brinsolaro had already been killed inside the magazine’s office.

The fake site carried a bogus news story which questioned the authenticity of footage of the fatal shooting of a Muslim police officer.  The story makes out that the recording of Merabet was recorded in two takes and it was a plot by U.S. or Israeli intelligence agencies to incite hatred against Islam.

The website was taken offline on Monday afternoon after it had been live since around Dec. 28, said Andrew Hay, senior security research lead and evangelist for OpenDNS.  At present the url redirects users to a YouTube video uploaded by 108morris108 who is seen apologizing for misleading viewers about some hoax video. It is not known whether 108morris108 is speaking about the same footage.

Hay adds that the site creators had earlier made two attempts to pull in traffic to their site, both apparently false.

First was about a ‘U.K. YouTuber’ who had been arrested in the Middle East on terror charges and the second one one promised readers new clues for the Internet cryptographic challenge called Cicada 3301. 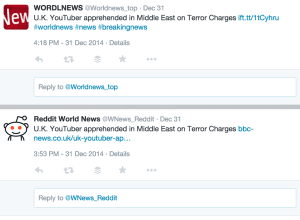 But the real glory for the website came from the conspiracy theory story.  It gained as many as 3,600 views an hour after it posted an article on Jan. 12 questioning aspects of the Charlie Hebdo attacks, Hay said. He added that the cloned BBC website didnt host any malware or redirects to malware website.

The website owner may have been getting lot of visitors from Reddit where he/his accomplice had posted a thread questioning the authenticity of the Charlie Hebdo footage.

The webcache version of the cloned website can be seen here.