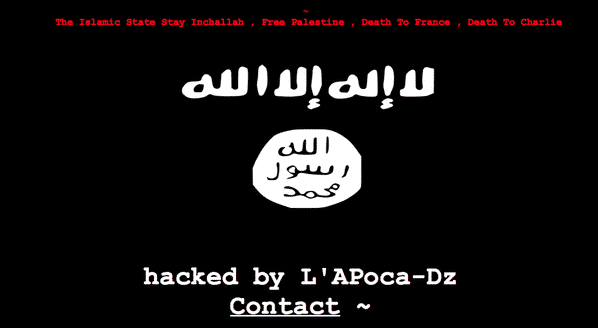 A hacker group calling themselves L’APoca-Dz has been hacking French websites and posting anti Charlie Hebdo messages on the defaced pages.

Only two days have passed since the gruesome terrorist attack on French satirist magazine Charlie Hebdo’s office.  The attack which was carried out by two Islamist gunmen who massacred 12 people in cold blood, has left the French people stunned.  Known for their liberal values, the French people have taken this gruesome massacre as a attack on their freedom of speech and have been trending #JeSuisCharlie ever since the attack happened.

The hackers who seem affiliated with ISIS have taken down websites belonging to the French towns of Goussainville, Ezanville, Jouy-le-Moutier, Piscop, and Val D’Oise.  The defaced page was showing the “black flag of Jihad” that is synonymous with ISIS supporters and display messages saying “Death to France.”

The sites also feature the message “hacked by L’APoca-Dz”, along with a link to a Facebook page. Further research points the fact that the hacker(s) is/are a Algerian by origin and have been responsible for hacking number of Israeli websites and posting anti-semitic messages.

The websites have since been restored.