AVG, an antivirus and malware cleaning software provider, has published its latest quarterly study of the worst battery, data, storage and performance consuming apps on Android smartphones and tablets. The list contains a more of earlier faces from the last report while a more number of new faces are added too. AVG has examined the apps of more an a million of its customers and found which ones drain the most battery, also incidentally, uses the most storage and eats the most data.

As with earlier years, Facebook Android App tops the list of Apps which eat into everything from performance, data storage to battery draining. It is joined by Spotify and Instagram to be overall performance hoggers on Android.

This time it seems like Samsung’s “bloatware” still can’t shake its resource cravings, particularly in the battery draining category. Although, there aren’t many Samsung apps this time in this category. In case of battery, Samsung’s Beaming and Security Updates services appear as the two worst run-at-startup apps, while Samsung’s WatchOn remote app was the most energy consuming app run by users.

Mostly, the apps which consume maximum battery are the ones that start up automatically when you turn your phone on. Other big battery drains come from apps that constantly sync with the internet.

Also there are certain similar faces when it comes to eating up message space and hampering handset’s performance. Facebook, Instagram, Spotify and Google’s Chrome Browser have now become the most familiar to appear in the “storage eaters” category.

In the category of storage consumption, the NY Times app held the number 1 spot previously, but is now completely out of the top 10. Facebook, Spotify and Instagram are also the three worst apps you did want to uninstall, if you want to keep your Android devices running smoothly, all of which also featured in the top 5 last quarter. The Amazon AppStore has also leapt into the top 5 this year.

Beyond this if you look in the field of data usage then social media and video platforms are the worst which are using the data with any hindrance thoroughly. Facebook, Instagram, Spotify, Nextflix and Tumblr all ranking highly, the Daily Mail app is the worst offender. As they consistently rank highly in almost every category, these social apps populate AVG’s top 10 overall performance sapping apps of Q4 2014. 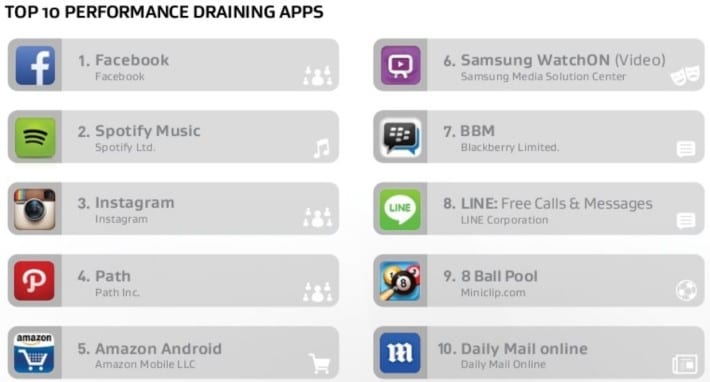 Also if you are facing issues regarding performance then here are some tips revealed by AVG for better performance.

Firstly, turn off unnecessary notifications and notification apps. Secondly, turn off app specific features that you don’t use, such as location tracking. Thirdly, regularly delete cache data for larger apps to save space. Fourthly, where possible, limit the amount of data consumed by adjusting refresh intervals and/or WiFi only settings. Lastly, Lower your display brightness and turn off wireless features (WiFi, Bluetooth, NFC, etc) when you’re not using them

A lot more information’s is also there in the report of AVG about its user habits, commonly installed apps and statistics for games, although. To read the full report, just click on the link to get full details right here.