The Lizard Squad are back to their favourite haunt for hacking, gaming servers of Xbox Live.  They apparently have targeted the Microsoft’s online gaming service, taking it offline for hours.

A bird told us #xboxlive will be #xboxlivedown shortly
Weird

Gamers have also reported that they were experiencing problems loggin on to the servers.  Reports indicate that partial service of Xbox Live are offline in North America since Monday morning, several hours after an outage apparently caused by a distributed denial of service (DDoS) attack.

Anyone else notice how quiet @Xbox & @XboxSupport were when we knocked the networks off earlier for 3 hours? ? #xboxlive

Lizard Squad who are infamous for their earlier downing of Xbox Live and Sony’s PlayStation Network (PSN) over Christmas, claimed responsibility for the outage, which reportedly began at around 4 a.m. GMT. They carried out the hack with the help of another hacking group called LNO (Like None Other), according to another Lizard Squad tweet.

The outage lasted about three hours and is now mostly resolved, according to Down Detector, which collates user reports. While the Microsoft own Xbox Live Status page gives the following report : 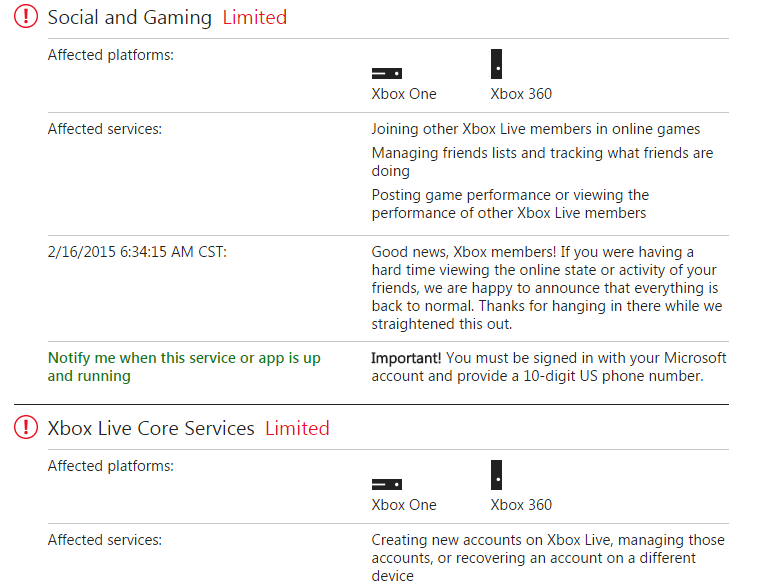 Threat to Sony and PlayStation Network

The Lizard Squad have also promised to bring down the PlayStation Networks but as of now they are working alright. However knowing Lizard Squad and their methods, Sony and PSN gamers may have a big threat of downtime looming over.

Some #PSN users may experience network issues courtesy of your favorite Lizards. #LizardSquad

Apparently they have fallen out with their old friend Kim ‘Santa’ Dotcom also according to this tweet :

Oh btw, someone tell @KimDotcom to take his mega vouchers, and shove them up his fat ass.
The very few we didn't sell anyways ???????

This is a developing story and we will update you with latest news as it happens.