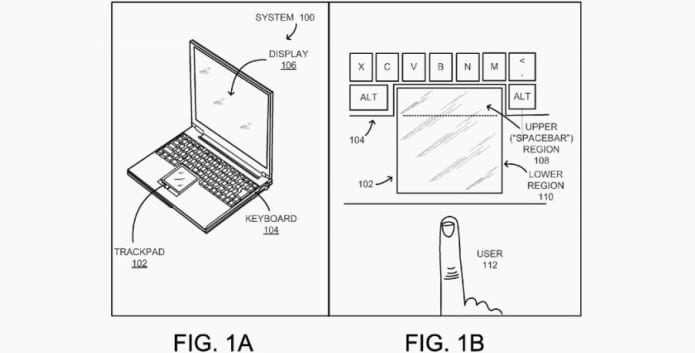 Spaceless Internet : Google plans to create a virtual keyboard without any spacebar

Every manufacturer of computer these days is thinking of ways to make its laptops smaller and more easy to be carried around. Apple recently released a new MacBook that saves space by moving the keys on the keyboard together, and Dell got rid of the bezel on its newest XPS laptop. However, a new patent given to Google today could show the way for the most space-saving laptop.

In the patent, the company drew a design for a laptop that takes the place of the space bar with an extended touchpad. The patent states that part of the touchpad—separated by a line or a ridge—would act as a space bar, and the rest would just be a regular trackpad. A set of sensors that are put under the touchpad would ascertain whether the user wants a space bar or a mouse: When the user is typing, a single tap will create a space, but while using the touchpad as a mouse, a tap will result in a mouse click.

According to the patent, Google’s logic for a virtual keyboard is to create a smaller laptop computer by pushing the touchpad up into the area that the space bar would have occupied. Lenovo’s current laptops are already trying to save a little space by placing the touchpad a little closer to the keyboard. However, why Google thinks it would be worth having just one virtual key is the question asked. Apparently any number of keys could be turned into virtual keys, saving even more space on a laptop. However, you could just use a tablet at that point.

A representative for Google told Quartz that some patents it holds turn into products, and some don’t, and that “prospective product announcements should not necessarily be inferred from our patents.” While there is no assurance that Google will change this patent into something that it includes in its Chromebook line of laptops.

Google’s space bar patent as a matter of fact was rejected twice over the last four years before being approved, as mentioned in the Patent Office’s digital paper trail system. Looks like the patent drafters had been just spacing on some of the details.

In future if you miss the space bar, you know whom to blame it for!