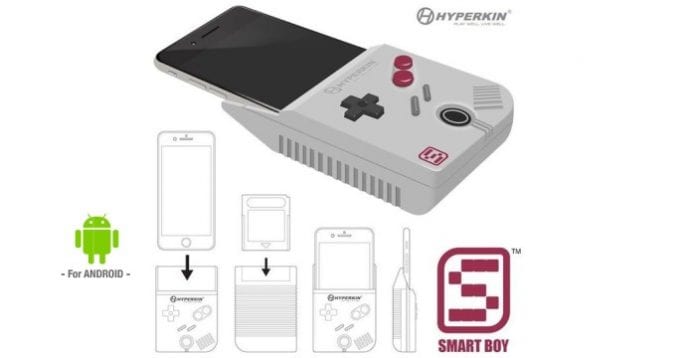 After iPhone, Hyperkin is building the “Smart Boy” for Android devices

Earlier this month Hyperkin had released a press conference to announce their Gameboy compatible hand held device “Smart Boy” for the iPhone. In an interview with the Daily Dot Chris Gallizzi, Hyperkin’s product developer had said that they are still under developmental stages and the product might be extended to Android and Windows devices. And true to his word,  now the company is working on building the Gameboy for Android versions as well.

The Android version has slight additions in comparison to the iPhone version. The differences have been explained on a dummy Samsung Galaxy Note 4. Android users will be able to swing around the front face of the device so that they can have access to the entire touch screen if need be. Further, the USB port also can be revolved freely, this has been adjusted so as to prevent the port from bending. Some shoulder buttons have also been added and is supposed to be used for the Gameboy Advance games, the original Gameboy does not have any “shoulder button” hence this would be something unique and interesting.

Hyperkin is working hard to bring the device to their consumers at the earliest, however they have not released the dates as of now. Further, all the changes made to the designs will be incorporated in the iPhone versions as well. May be some new features would also be added in the coming days as the device is still under developmental stages.

As of now there are no news regarding the Microsoft version of the device.