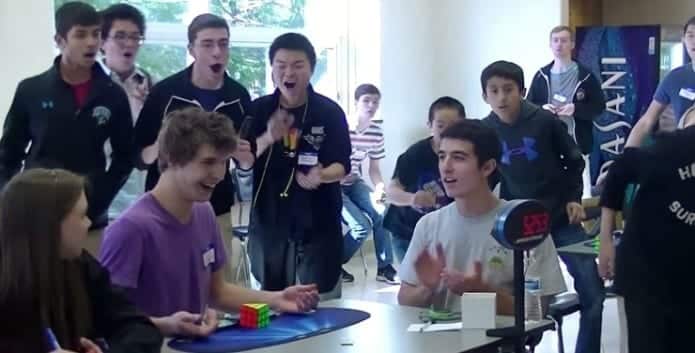 Collin Burns, a teen of Pennsylvania restores 3x3x3 Rubik’s Cube in just 5.25 seconds………most people would take that time to just check the colors of the scramble and probably plan their first move whereas the new world champion can solve the entire puzzle in that much time!! For the past 40 years the Rubik’s cube has puzzled people across the globe. The 3D combination Rubik Cube scramble originated in 1974 under the “Magic Cube” moniker and was built by Hungarian Sculpture and architecture teacher Ern? Rubik. Measuring about 2.5 inches on each side, it contains 21 unique miniature cubes which allows for multiple solutions.

The previous world record of restoring the 3x3x3 Rubik’s cube in just 5.55 seconds was held by Mats Valk, from Netherlands.

Doylestown Spring 2015 organized the official World Cube Association (WCA) event at Central Bucks West High School, Doylestown, PA. The competitors were charged some fee whereas the spectators were allowed a free entry to this event. The proceeds from the competition would be donated to “A Woman’s Place” which is Bucks County’s only domestic violence prevention organization.

Last week, Saturday, during the final round of Rubik’s Cube competition which was being held in the cafeteria of the Bucks County high school, Collin Burns broke the old record and set a new world record of solving the Rubik’s cube puzzle in 5.25 seconds. The new record and Burns accomplishment was celebrated among huge screams of joy and excitement from all those who were present in the cafeteria at that moment.

Though, not much is known about Burns, however, he seems to be simply astonished at his achievement of completing the puzzle in such a short time. Further, Burns also wrote in You Tube video : “I lost my Hualong, so I used a Yuxin, my back up main,” wherein he also gave reference to different types of Speed Cube.

A WCA representative confirmed Mashable that though they have not updated the new record in the WCA database however, Collin Burns has set a new world record till now as the competition was an official WCA one.

As per Mashable’s report, the WCA official said: “Although this result has not been uploaded to the WCA database just yet, we can confirm that this is (or will be soon) the new official WCA world record for the 3x3x3 single solve category. To our best knowledge, it has been performed in an official competition, with all the rules being followed, even the scramble has been checked for its correctness.”

As per the WCA website, this international competition will continue till last week of October 2015 and it does provide more than 80 opportunities to the contestants across the world to break Burns record. On Saturday when Burns set a new record the competition was held at various other places including Chile, Philippines, Denmark, China, Canada, Brazil and Latvia.

By end of October it will be very much clear if some other participant steals away the title of “World Rubik’s Cube Championship” or Collin Burns retains his newly acquired glory!!