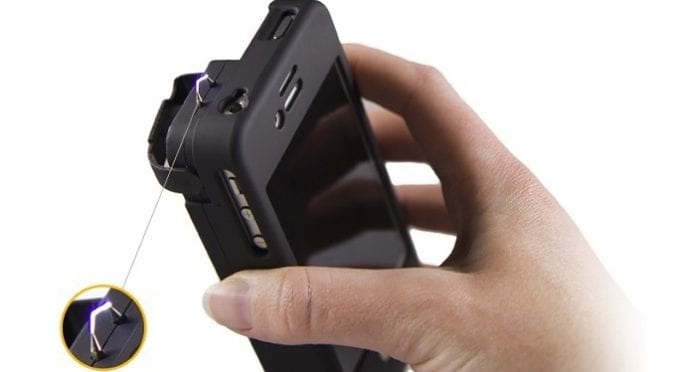 The latest entrant to the law enforcement and underworld arsenal is a all new stun gun that looks just like an iPhone and is five times more powerful than a Taser.

Modelled on the popular Apple handset, the device discharges its powerful shock from two metal pin points at the top, fired by what is normally the volume buttons, the Mirror reported.

The weapon is on sale on plenty of websites and sources indicate that there is a good demand for them from underworld. Website based in China, Germany and the US are selling these iPhone-style Stun Guns and the delivery escapes customs authorities because the when the parcel containing them is x-rayed, it gives the authorities a false impression of being iPhone because of similar dimensions.

The underworld source, based in Warrington, Cheshire, said the stun guns were often used by criminal gangs on rivals, paralysing a victim’s muscles, causing momentary agony while not leaving any visible scar.

The weapon is mostly popular on the streets of Liverpool, Manchester and Leeds as they can be bought online from abroad for just £100 or $ 148.00