Two weeks after the WhatsApp calling rollout for Android smartphones and tablets, WhatsApp yesterday updated its iOS App to give WhatsApp voice calling to iPhone and iPad users. Once they update their Apps, iPhone/iPad users will finally be able to place calls over the Internet (VoIP)  with the company’s latest free calling feature.

Much like Android, iPhone and iPad users will see a new Call tab in WhatsApp dashboard once they update their App.  WhatsApp has said that the rollout is in a phased manner so not all users will be use the voice calling feature immediately.

The latest update to the iOS version of WhatsApp also includes primarily support for the iOS 8 share extension which allows you to send videos, photos and links to WhatsApp chats from other apps. You will be able to take photos quickly inside chats, and send multiple videos in one go, which can be cropped or rotated before being shared. 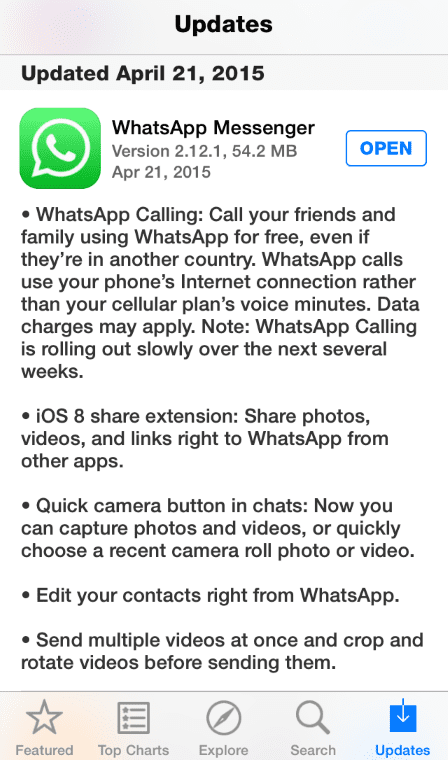 The Facebook-owned company last week crossed the landmark of having 800 million monthly active users and now with the new voice calling feature it hopes to take on Skype and Viber in the voice calling segment.

The Windows Phone and BlackBerry users will have to wait for their turn for WhatsApp calling.