“Cicadas” are U.S. military’s ‘Robotic carrier pigeon’, these mini drones can be used for eavesdropping and picking up details of the enemy submarine during war front.

A new miniature drone that fits into the palm of a hand has been invented by the U.S. military researchers. This tiny drone is named “Cicada” and it can be used for a myriad of purposes in civil missions as well as on the war fronts. In addition, the drone can also be used as a spy to eavesdrop on the enemy troops and even pick up details of enemy submarine.

The “Cicada” aka Covert Autonomous Disposable Aircraft, actually is a “micro air vehicle” that has been specifically created to carry out missions in remote battlefield and hence it is much smaller, cheaper and designed to be simplistic in comparison with other robotic aircrafts.

For a long time U.S. military researchers have been engaged in creating drones of various sizes and Cicada is one of the tiniest creations ever.

The mini drone has received its name from an insect “Cicada” as the researchers were inspired by the unique profile of these insects.

The insect Cicada has an unique life cycle and are known to live underground for a major period of their lives till they attain their adult stage. Once they achieve adulthood they emerge in great swarms, undergo reproduction and finally the newly hatched nymphs drop to the ground and the next cycle would begin, on the other hand the adult Cicada lays dead on the ground.

Aaron Kahn of the Naval Research Laboratory told AFP: “The idea was why can’t we make UAVs (unmanned aerial vehicles) that have the same sort of profile.”

He added: “We will put so many out there, it will be impossible for the enemy to pick them all up.”

Cicada is made up of only 10 parts and it resembles a toy airplane with circuit board. 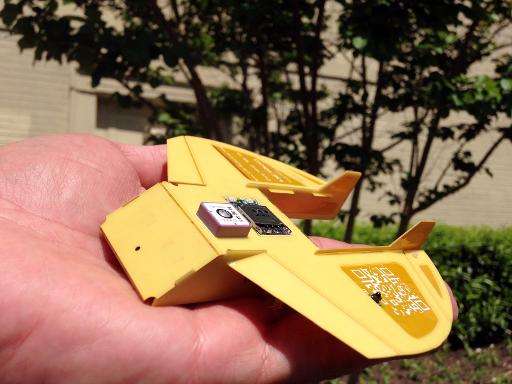 Kahn, also mentioned that the cost of the prototype was only few thousand dollars and in future a single mini drone would cost about $250, hence these minuscule drones are much cost effective.

Researchers, further mentioned that these Cicadas aka micro disposable air vehicles are configured to GPS (Global Positioning Systems) programs. Thus it was confirmed that these drones would be controlled by some engineer located at the naval lab indicating that it is not a fully automated drone.

Hence, when the Cicadas are dropped from an  aircraft or a balloon or larger drones they can glide like birds under controlled supervision.

Way back in 2012, a ‘flight test’ was carried out in Yuma, Arizona wherein Cicada drones were dropped from a height of about 17,500 meters which is almost 57,600 feet. The tiny drones dropped at the rate of 11 miles and landed within 15 feet of its target.

Researchers further mention that the drone can fly at a speed of 75 kph which is roughly 46 miles. Since there are no motors or propellers, the mini drone’s flight is noise less.

Daniel Edwards, an aerospace engineer at the Naval Research Laboratory, said: “It looks like a bird flying down.“  he added : “the drone is very difficult to see.”

During the flight test, the Cicadas were equipped with sensors which recorded the weather readings for temperature, air pressure and humidity.

Researchers feel that besides war front, the mini drones could also be used for a variety of myriad missions such as monitoring traffic, forecasting weather, even during some natural calamities.

Edwards said: “They are robotic carrier pigeons. You tell them where to go, and they will go there.”

These mini drones could be equipped with light weight sensors like microphones that can help in eavesdropping the enemy troops.

Kahn said: “You equip these with a microphone or a seismic detector, drop them on that road, and it will tell you ‘I heard a truck or a car travel along that road.’ You know how fast and which direction they’re traveling.”

One more possibility is to outfit the mini drones with magnetic sensors so as to pick up details of the enemy submarines.

For now researchers feel that the drones cannot be deployed to take video feeds due to its shortcomings in regards to bandwidth.

The researchers say that the tiny Cicadas are surprisingly robust.

Edwards said: “You can throw them out of a Cessna or a C-130. They’ve flown through trees. They’ve hit asphalt runways. They have tumbled in gravel. They’ve had sand in them. They only thing that we found that killed them was desert shrubbery.”

As per the researchers, Cicada program has succeeding in creating great interest among every branch of the U.S. government including some intelligence agencies after it was on display at the Pentagon’s “lab day” this week.