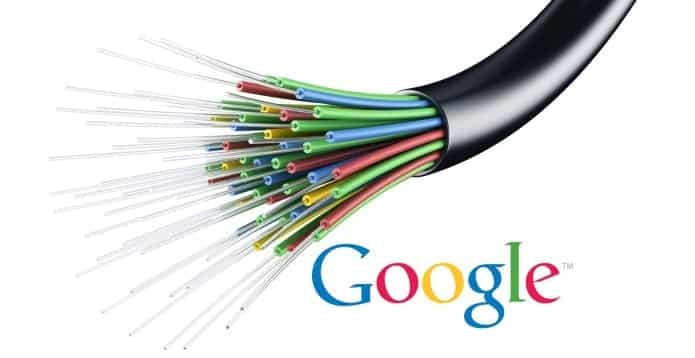 Google Fiber is forwarding a copyright infringement notices to all its subscribers which includes controversial and automated piracy fines. Through these notices, the right holders are demanding a settlement of up to hundreds of dollars. Google’s decision to forward these emails is very surprising, as the company generally has a very good track record of protecting its consumer interests.

Every month Google is receiving dozens of millions of DMCA takedown requests from copyright holders, most of which are directed at its search engine only.

However, with Google Fiber being rolled out in many cities, notices are targeting allegedly pirating Internet subscribers are becoming more and more common as well.

These include regular takedown notices but also the more controversial part is the settlement demands which are being sent by companies such as Rightscorp and CEG TEK.

Instead of simply trying to alert the subscribers that their connections are being used to share copyright infringing material, these notices are serving as automated fines, offering subscribers settlements ranging from $20 to $300.

The scheme is using the standard DMCA takedown process which means that the copyright holder doesn’t have to go to the court or even know who the recipient is. In fact, the affected subscriber is often not the person who is involved in sharing the pirated files.

To protect its customers against these practices many ISPs including Comcast, Verizon and AT&T have taken the step of not forwarding any settlement demands. However, information received by TF shows that Google does take part.

Over the past week we have seen settlement demands from Rightscorp and CEG TEK which were sent to Google Fiber customers. In an email, Google is forwarding the notice with an additional warning that repeated violations of terms of service may result in a permanent disconnection.

“Repeated violations of our Terms of Service may result in remedial action being taken against your Google Fiber account, up to and including possible termination of your service,” Google Fiber writes. 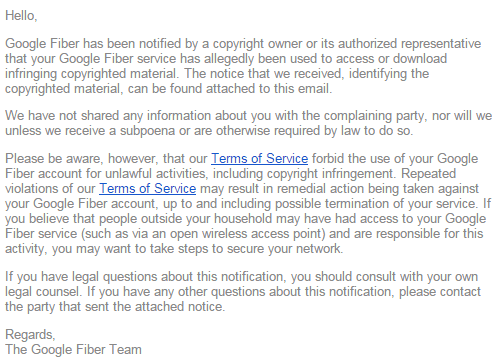 Below Google’s message is the notification with the settlement demand, which in this example was sent on behalf of music licensing outfit BMG. In the notice, the subscriber is being warned over possible legal action if they do not settle their dispute.

“BMG will pursue every available remedy including injunctions and recovery of attorney’s fees, costs and any and all other damages which are incurred by BMG as a result of any action that is commenced against you,” the notice reads.

Facing such threatening language many subscribers have decided to incline the pay, which led some to accuse the senders of harassment and abuse. In addition, several legal experts have spoken out against this use of the DMCA taking down process.

Mitch Stoltz, staff attorney at the Electronic Frontier Foundation (EFF) earlier spoke up that Internet providers should carefully review what they’re forwarding to their clients. Under U.S. law they are not suppose to forward DMCA notices and forwarding these automated fines may not be in the best interest of consumers.

“In the U.S., ISPs don’t have any legal obligation to forward infringement notices in their entirety. An ISP that cares about protecting its customers from abuse should strip out demands for money before forwarding infringement notices. Many do this,” Stoltz said.

According to Stoltz these settlement demands are actually misleading or inaccurate, suggesting that account holders are responsible for all use of their Internet connections or not.

“The problem with notices demanding money from ISP subscribers is that they’re often misleading. They often give the impression that the person whose name is on the ISP bill is legally responsible for all infringement that might happen on the Internet connection, which is simply not true,” he notes.

While Google is certainly not the only ISP that is forwarding these notices it is one of the biggest names involved in this matter. TF tried to ask Google why they are forwarding the notices, but unfortunately the company did not find it important to respond to our request for comment.