Several Redditors have discovered a unique bug in Apple’s iOS system which can be used to send a special text message to the iPhone/iPad and send his/her iPhone/iPad crashing or rebooting.

The bug was posted on Reddit cause Apple’s iOS to choke when it receives the message thereby crashing or rebooting the device as long as the recipient is not viewing their message history at the time.

A Reddit user, Sanlansam first posted a thread regarding this bug which is given below :

If you send the following:

To an iPhone, it restarts their phone.

As soon as somebody sends a message containing the above text, it is displayed as a banner alert or notification on the lock screen of the iPhone/iPad or iPod Touch. The iOS then attempts to abbreviate the text with an ellipsis. If the ellipsis is placed in the middle of a set of non-Latin script characters, including Arabic, Marathi, and Chinese, it causes the system to crash and the phone to reboot.

Not all non-Latin messages can crash the iPhone. According to the Reddit thread, only a specific string of text to be sent within an iMessage or SMS can cause the crash or reboot. 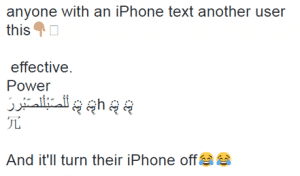 Even the non-Latin characters have to be placed in correct ellipsis to make the iPhone crash. Right now the bug is being used by iPhone users as a prank to crash their friends and dear ones iPhones/iPads and iPod Touch but some users have reported that after the attack, they can no longer access the messages.

It is quite possible that cybercriminals can turn this bug into some kind of vector to attack the iPhone users. The simple solution for disabling this bug is to turn off the notification feature for lock screen from the settings. Go to Settings–> Notifications–> Messages–> and change to no notifications

It seems that Apple Watch is not affected by this bug, so if it is absolutely necessary, you can turn on the notification via Apple Watch.