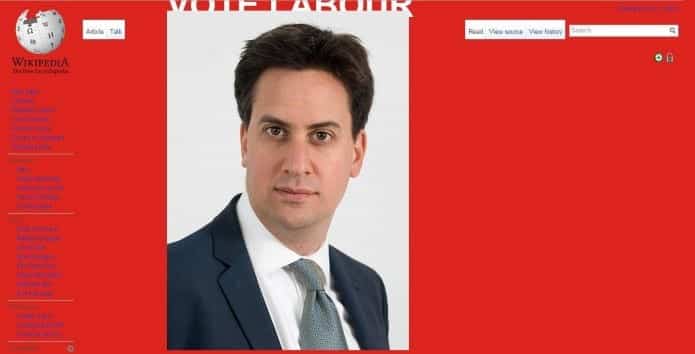 With just hours to go for the voting in United Kingdom, elections always bring out the worst in political parties and their supporters. Something of this sort happened with David Cameron and Nigel Farage’s Wikipedia pages today.

Supporters belonging Ed Miliband’s Labour party which is the main rival to David Cameron’s Conservative Party and Nigel Farage’s UKIP party, today hacked their Wikipedia pages and put up a huge image of Miliband with the words ‘Vote Labour’

The red page, with an image of Ed Miliband, was all that showed up as you scrolled down the page.

Although the pages were restored immediately after Wiki admin noticed the hack in the middle of the afternoon, thus far nobody has claimed responsibility.

As UK populace is very active on social media, this hack could shift a few votes from Labour to either UKIP or the Tories.