Facebook trying to convince users through ads on their timelines that Internet.org does not violate net-neutrality

Facebook is showing an ad on FB user’s timeline which actually tries to convince them that the internet.org stands for net neutrality. The campaign shows Facebook promoting ‘free Internet’ for everyone.

After the Airtel Zero controversy over net neutrality, Facebook promoted nternet.org has been aslo been panned for violating principles of net neutrality by hiding behind the garb of providing free internet to poor people in India.

In fact it only users to access to the websites that have signed up for Internet.org platform, while blocking access to those that did not join the Facebook initiative. After much criticism from all over the world, Facebook opened up the platform to all developers earlier this week.

From yesterday, Facebook is running campaign on FB users timeline which is given below : 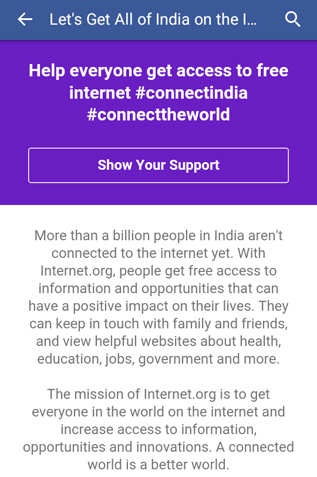 Once the users click on ‘show your support’ they are redirected to a petition on Change.org which states :

More than a billion people in India aren’t connected to the internet. The mission of Internet.org is to get everyone in the world on the internet so they have more access to information, opportunities and innovations. A free and open internet brings us closer together and helps us solve problems, find jobs and discover new ideas. It lets us stay in touch with the people we care about wherever they are. A connected world is a better world.

Internet.org lets people view helpful websites without paying for data. There are websites for health, education, jobs, government and more. People can also use apps to share updates with family and friends. Internet.org can impact people in so many positive ways: a chicken farmer is able to sell more of his stock, an expectant mother can look up health information that will help her raise her child, and a student can find education services to study for exams. In fact, research has shown that for every billion people who gain access to the internet, more than 100 million rise out of poverty.

Internet.org works with service providers and developers to offer these free basic services, and people can choose which ones are most important to them. It’s free to join and open to all.

By showing your support, you can help Internet.org continue providing internet access and opportunities to the people of India, including your friends, family and community. With more than one billion people in India getting onto the internet, we can help increase economic and social progress in the whole country and we can improve the lives of so many talented people who have so much to offer the world. Join us in our commitment to making India—and the world—more open and connected.

The ad is actually tricking users by not mentioning the controversial issues surrounding the Internet.org programme anywhere on the ad itself until they reach the Change.org petition. There is a likely chance that many of Facebook users might have signed up for the petition without understanding the surrogate theme of the ad or the petition

At the time of writing this article, more than 150,000 Facebook users had already signed up for the petition.