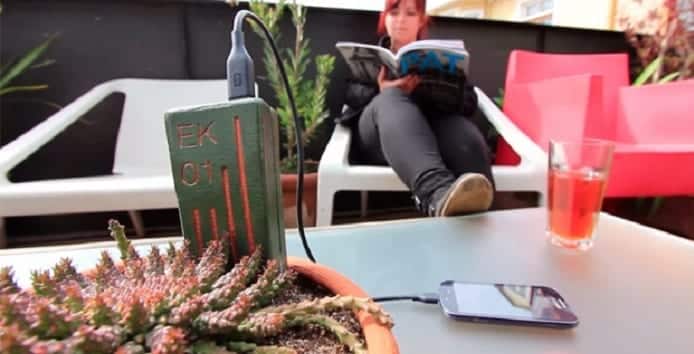 E-Kaia, a portable smartphone charger harnesses energy from plants for charging the smartphone

An engineering trio has created a novel smartphone charger “E-Kaia” that takes energy from plants for charging the smartphone.

Plants are the main source of Oxygen. Well, three engineering students, Evelyn Aravena, Camila Rupcich and Carolina Guerrero have further proved that energy from single plant can also be harnessed to provide power for charging smartphone that would remove the need for electric power supply!!

It was in 2009, when these girls came up with an innovative idea of creating a smartphone charger that would work without electric power supply. At that time the girls were still in university at Duoc UC in Valparaíso and the Andres Bello National University, Chile.

Netherlands already uses the technology of utilizing living plants for generating electricity and this project is known as Plant-e; however the major difference between E-Kaia and Plant-e is that E-Kaia requires only one healthy plant while Plant-e requires many plants to harness the required energy.

Basically, one needs to bury a bio-circuit in a plant pot which has a healthy plant. The outputs of this bio circuit needs to be lead out of the soil. With this circuit one can harvest about 5 Volts and 6 milliamps that can be converted into electrical energy without damaging the plant. The electric power generated has the potential to charge the smartphone in about one and half hours as per the inventors of E-Kaia.

E-Kaia is a portable, eco friendly charging device prototype which is still awaiting its patent. The engineering students envisage that this technology is not limited till smartphone chargers but it can be used to harvest energy to charge LED lamps, fans, speakers; basically any device that works on low power and gets its batteries recharged with the help of USB port.

The girls have created a YouTube video for promotion of E-Kaia where they further added:

“We found ourselves with the same problem every day, and we wanted to find a solution to it. Living in a world that completely depends on electricity, people would be out of communication whenever that source fails, This is how we came up with a technology that allowed us to use natural resources, maintaining that energy and also the environment.”

For several years Aravena, Rupcich and Guerrero have been effectively trying to bring their innovative solution to the market and have successfully gained some funds for their start-up through some innovative competitions.

In 2014, the trio was awarded with the prestigious Avonni National Award of Innovation by the Chilean government for their invaluable contribution towards their country.

As of now E-Kaia is not ready for sale, however it seems the creators are working to start advertising their product this year.

As of now E-Kaia is working towards increasing their energy production and they have plans to utilize the technology for bigger projects like powering street lamps and parks by using its own plants and even bringing electricity to rural areas in Chile which has limited access to power plants.