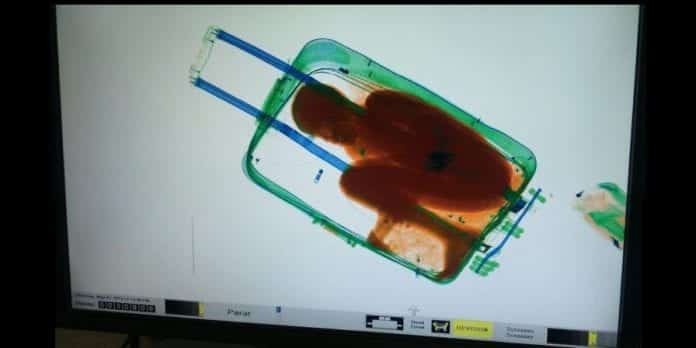 Ceuta officials were startled to find an 8 year old boy terribly packed in a suitcase which was detected by the X ray machine at the border crossing.

In an unbelievable incident, a nineteen year old woman was caught by the Spanish official when she was trying to smuggle an eight year Ivorian boy in a suitcase.

On Thursday, a woman was found taking a pink roller suitcase through the pedestrian crossing from Morocco to the Spanish governed territory,Ceuta, in North Africa. The woman was trying to smuggle the boy from Morocco to Ceuta and hence was a bit nervous while she was waiting for her security check at the land crossing. The securities snooped something was fishy and hence decided to scan her suitcase. When the bag was being scanned by the X ray machine, the guards found something strange in the suitcase which seemed to be a human being. Hence, the bag was opened and what they found in the bag startled them.

The Spanish Civil Guard spokesman said: “When they put the suitcase through the scanner, the operator noticed something strange, which seemed to be a person inside the case. When it was opened they found a minor, in a terrible state.”

According to the officials, the boy is from Ivory Coast and he is eight years old.

The spokesman also feared that if they had not spotted the boy then he said: “it could have led to a tragic end.”

As per BBC reports, the boy is now in the custody of the Ceuta officials.

Further, the Spanish police has detained the Moroccon woman who was trying to smuggle the minor as well his dad who too was trying to cross the border few hours later. It seems that the boy’s dad is also from Ivory Coast however he holds a residence permit for  Canary Islands and was thus attempting to get reunited with his son.

As per a report from the Spanish newspaper El Pais, the woman is not related to the boy and was paid by the boy’s dad to carry him in the suitcase and cross the border because an earlier application to cross the border was denied by the authorities.

The Spanish enclaves on Morocco’s border, Ceuta and Melilla, have been experiencing waves of African migrants who attempt to enter the European territories. As per Human Rights Watch report more than 4,300 tried to enter the two enclaves in 2013 in comparison to 2804 in the previous year. The report also mentions that enormous group also try to cross the 20 foot high fence between the territories and Morocco and it seems 500 people made the climb to Melilla in 2015.