Facebook glitch makes users’ posts disappear; Facebook has faced a backlash from users who found some posts disappeared while others couldn’t link to content outside the social network

Irate Facebook users today reported that they were unable to make posts with links to outside content. Others reported that when they wanted to post updates containing links were mistakenly sent a warning saying they were violating the site’s security policy.

The problems seemed to occur because of a bug in the update that Facebook rolled out today. The bug apparently affected only those posts which contained links to the content outside of Facebook.

The bug affected Facebook’s image-scraping system, which automatically pulls pictures from posted links. The image-scraping tool is supposed to help users present links to other content with a photo from the site they are linking to. The post, complete with picture, then appears friends’ timelines.

Users attempting to post new links were met with a security warning because of the bug. Some users who clicked on existing links faced similar warnings, which read that the link has been blocked for security reasons. Many posts containing links also vanished.

The hardest hit by the bug were small and medium business owners who use Facebook to promote  and sell their content. They took to social media and were particularly vocal about the impact on their businesses. 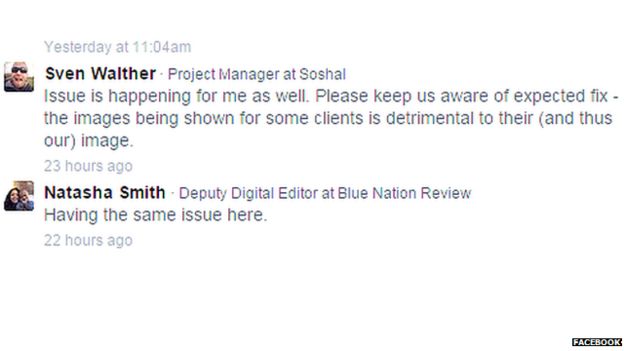 Facebook spokesperson said that an error in their system that helps block bad links on Facebook incorrectly marked some URLs as malicious or inappropriate. So some existing posts were hidden while other posts were blocked completely.

“An error in our system that helps block bad links on Facebook incorrectly marked some URLs [web addresses] as malicious or inappropriate. As a result, some existing posts were hidden, while other posts were blocked completely” said Facebook in a statement.