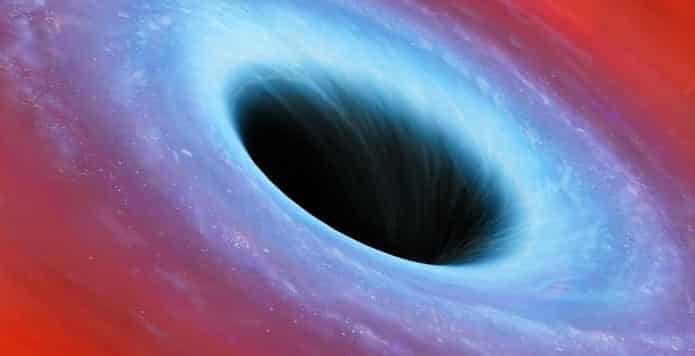 Astronomers have used NASA’s Chandra X-ray Observatory to prove that multiple eruptions from a supermassive black hole over 50 million years have rearranged the cosmic landscape at the center of a group of galaxies.

The history of black hole eruptions was revealed by the scientists after studying the group of galaxies named “NGC 5813”. Researchers said that the Chandra observations are the longest ever obtained of a galaxy group, which lasts just over a week. The Chandra data are shown in this new complex image where the X-rays from Chandra (purple) have been combined with visible light data (red, green and blue).
Galaxy groups do not have hundreds or even thousands of galaxies like clusters do, they usually comprise of 50 or fewer galaxies. Similar to galaxy clusters, groups of galaxies are enveloped by giant amounts of hot gas that emit X-rays.

There is a supermassive black hole placed in the central galaxy of NGC 5813. The black hole’s spin is attached with gas spiraling toward the black hole which can produce a rotating, tightly wound vertical tower of magnetic field that flings a large portion of the inflowing gas away from the surrounding area of the black hole in an energetic and high-speed jet.

The researchers were able to conclude the length of the black hole’s eruptions by studying cavities, or giant bubbles, in the multi-million degree gas in NGC 5813. These cavities are fixed when jets from the black hole produce shock waves that push the gas outward and create massive holes.

The most recent Chandra observations found a third pair of cavities in lieu of three distinct eruptions from the central black hole. The two pair of cavities was formerly found in NGC 5813. This is the highest number of pairs of cavities ever revealed in either a group or a cluster of galaxies.

Each of the three pairs of cavities is coupled with a shock front, visible as sharp edges in the X-ray image. These shock fronts are similar to sonic booms for a supersonic plane; heat the gas, preventing most of it from cooling and forming large numbers of new stars.

“How a low-density bubble of air will rise to the surface in water, the giant cavities in NGC 5813 become optimistic and move away from the black hole”, researchers said.

In depth study of the shock fronts reveals that they are actually slightly broadened, or blurred, rather than being very sharp. This may be caused by turbulence in the hot gas. Assuming this is the case, the authors found a turbulent velocity i.e. the average speed of random motions of the gas is about 160,000 miles (258,000 kilometers) per hour. This is constant with the predictions of theoretical models and estimates based on X-ray observations of the hot gas in other groups and clusters.

The Astrophysical Journal related to these results was published on June 1st, 2015 and is also available
online.