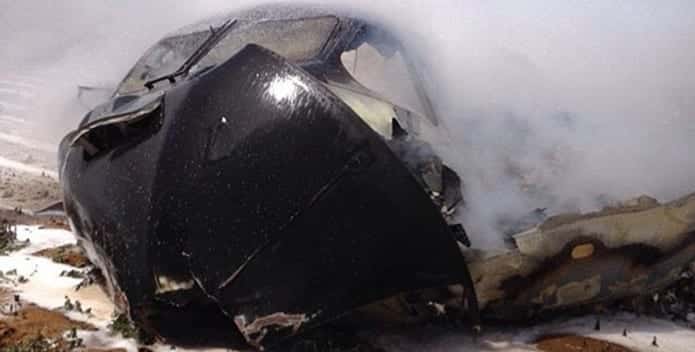 Airbus has confirmed that its A400M military plane that went down in Spain was caused by a faulty software configuration and not due to hardware failure. On Friday, Chief Marketing and Strategy Officer for Airbus, Marwan Lahoud told the German newspaper, Handelsblatt that there was a “quality issue in the final assembly” of the components of the aircraft engine.

On examination of the black box data, it was confirmed that while the code was correct, the way it had been configured was faulty. The test crew who were assessing the quality of the turboprop aircraft before purchase were killed in the crash. Airbus had already told A400M operators – Britain, Germany, France and Turkey – to check the planes’ Engine Control Unit. The Royal Malaysian Air Force also has an A400M, delivered in March.

The plane was assembled in Spain as part of a joint NATO programme. The crash led to the immediate grounding of six French A400M aircraft and a warning from Airbus to its military customers that there could be a serious flaw in the engine control software for the A400M. The project already numerous delays due to software glitches and cost overruns; however, it was assumed that the problems had been resolved.

The exact cause of the crash was withheld and delayed, as a Spanish magistrate had put the flight data recorders from the aircraft under seal. Since then, Airbus has been able to get the flight data, according to which Lahoud confirms that the engine control software on the ill-fated aircraft had been incorrectly configured at the time of installation of the engines.

“The black boxes attest to that,” Lahoud told Handelsblatt. “There are no structural defects, but we have a serious quality problem in the final assembly.” The error was in configuration settings programmed into the electronic control unit (ECU) of the engines and not in the code itself.

If this finding stands it would mean that Airbus can avoid a complete redesign of the A400M’s engine, which is the largest turboprop engines ever manufactured in Europe. The military was using the Spanish aircraft there to perform pre-acceptance testing on the aircraft.

Out of 174 A400M planes, only 12 so far have been put into active service. Another 12 are scheduled to arrive this year; however, a full investigation has been already begun by Airbus as to whether this can now safely go ahead.

“It is a precautionary measure which is part of our continued airworthiness activities,” a spokeswoman told Reuters.