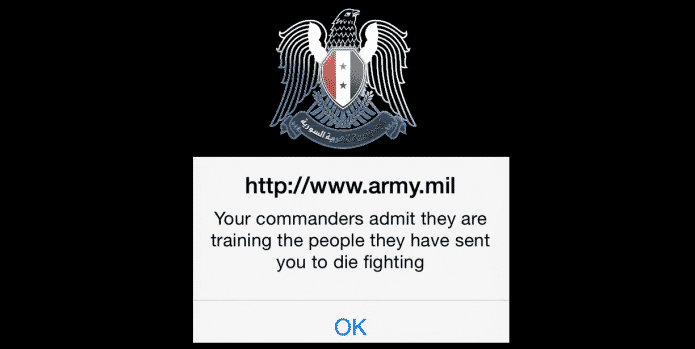 Hackers belonging to Syrian Electronic Army or SEA as it’s popularly called and vehemently pro-Bashar al-Assad regime in Syria, yesterday hacked into the United States Army’s public website.  The SEA hacked the site at approximately 3.00 pm ET and posted a message on the page saying SEA were responsible for hacking the website.

Visitors to the www.army.mil were greeted by a pop-up saying, ”Your commanders admit they are training the people they have sent you to die fighting.”

They followed it up with a tweet owning up the hack attack on the US Army website :

The #SEA hacks the official website of the US Army and leave several messages on it | https://t.co/Q93FQFg3cG pic.twitter.com/e8ZXp58oAY

Within minutes, the security team of the US Army spotted the hack and took down the website. They also made a post on the Fort Bragg Facebook page told people to avoid using the Army website because of the hack, saying

“Avoid using www.army.mil for the time being. The web site is currently down, reportedly from being hacked by the Syrian Electronic Army.”

The SEA fired a second tweet giving the reasons for hacking the US Army website just hours after it had hacked it.

One of #SEA messages left on the US Army website. #SEA #USArmy pic.twitter.com/jIA7HN9jXt

The screenshots published by Syrian Electronic Army point to the fact that they gained access to the US Army website by hacking the content delivery network, Limelight Networks, in this case.

The U.S.Army officials have confirmed that an attack had taken place and that the Army website had been taken offline but they didnt name the SEA as the group behind the hack attack.

“Today an element of the Army.mil service provider’s content was compromised,” said Brigadier General Malcolm Frost, chief of Army public affairs, in a statement. “After this came to our attention, the Army took appropriate preventive measures to ensure there was no breach of Army data by taking down the website temporarily.”

The SEA has a long history of hacking websites belonging to media and Western interests. It states that these media are blatantly publishing anti-Assad regime articles and spreading disinformation about the regime.

On 14th May 2015, the SEA hacked the Washington Post through domain poisoning and redirected visitors to a site belonging to SEA.  Earlier in December, 2014, Syrian Electronic Army hacked into the website of International Business Times for publishing a false story about Syria.

Similarly, on 26th November, 2014,  it also managed to hack a number of other news sites by hacking the third party CDN provider. The hacked websites included the New York Times, the Guardian, and Forbes.