GitHub is a global web-based Git repository hosting service, which offers all of the distributed revision control and source code management functionality of Git as well as adding its own features. Unlike Git, which is strictly a command-line tool, GitHub provides a Web-based graphical interface and desktop as well as mobile integration. It also provides access control and several collaboration features such as bug tracking, feature requests, task management, and wikis for every project 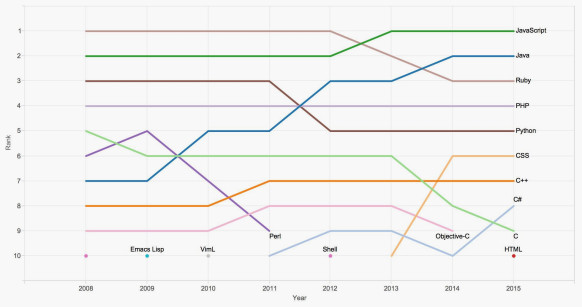 On Wednesday, Github published a graph tracking the popularity of various programming languages on its website. In recent years, Github.com has become the primary means of housing open source software which is freely available to the world. With 10 Million users as of today, GitHub gives us the idea of which language the programmers really prefer for their coding needs.
The graph gives a closer look at the popularity of different programming languages used on its code sharing website that lets anyone edit, store, and collaborate on software code.
Here are the Top 10 Programming Languages on GitHub today:
Java programming language looks to be the firm favourite of the programmers worldwide and has topped the race on GitHub also. A decade ago, Java was a language primarily used by enterprises like banks. But as GitHub’s data shows, it’s now at the forefront of languages used to build open source software.

Among new projects started on GitHub, Java is now the second-most popular programming language, up from seventh place in 2008. The popularity of Android smartphones has also given weight to Java as Google made Java the primary language for developing applications on Android smart devices.

On GitHub, Java is followed by Ruby on Rails, PHP, Python, and C#. C# is Microsoft’s version of Java.
The rank is calculated by a GitHub project called Linguist, which listed languages by their adoption in public and private repositories, excluding forks.
This is the list of languages which majority of codes on GitHub prefer, which language do you like the most and why. Do write it in the comments section below.