Tweaking your Windows 10 made easy with Ultimate Windows Tweaker 4.0

Windows Ultimate Tweaker is the ultimate tool if you want to enhance or change the way your Windows 10 works. For example, if you are recording your Windows 10 screen and want “borderless fullscreen window” mode. Using Tweaker version 4.0 you can hide it with a click in check box. 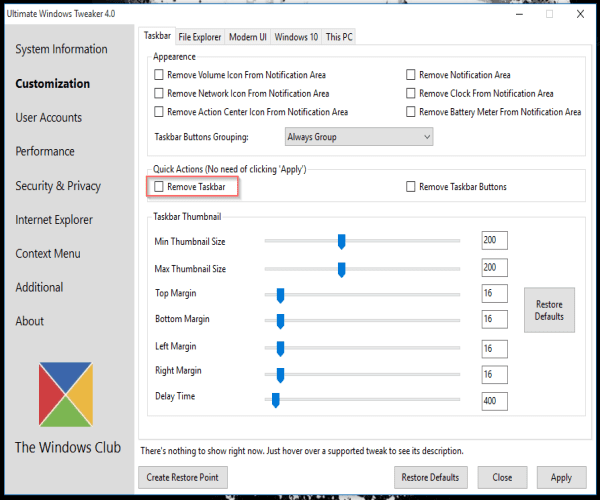 The Tweaker app has been redesigned to fit in with the Windows 10 user interface, with new tweaks added, and existing ones updated or removed if no longer relevant. The developers have added a new category of tweaks with a whole section devoted to the desktop context menu, allowing users to add their choice of additional options (including modern and built-in apps, as well as system tweaks) to the right-click menu.

Two new tabs also replace the “Additional” tab found in the previous version’s Customization section: Windows 10 and This PC. The latter makes it possible for users to add shortcuts that appear when in This PC view in File Explorer, while Windows 10 contains a series of OS-specific tweaks focused around performance and its look and feel.

The first time users launch the tool, a SmartScreen security dialog may pop up — users should click for additional options and choose to “Run anyway”. The app will now launch, and the SmartScreen dialog won’t appear in future.

Ultimate Windows Tweaker 4.0 is available now as a freeware download for Windows 10 users.

Note: Ultimate Windows Tweaker 4 requires the Microsoft .Net Framework 4 which Windows 10 ships with. The program does not need to be installed and can be run from any location on the system once it extracted.