The Ahmed Mohamed clock bomb controversy has caught the school authorities pants down with several celebrities supporting him. President Obama has already invited him and Google, Facebook are in queue while Twitter is offering an internship to him.

Apple co-found Steve Wozniak found himself nostalgic after reading the teenager’s misfortune with the clock which was taken to a bomb by his school authorities and led to his arrest. Wozniak or Woz as he calls himself on Facebook narrated a school time incident from his own life when he had to spend ‘juvie’ or juvenile detention. 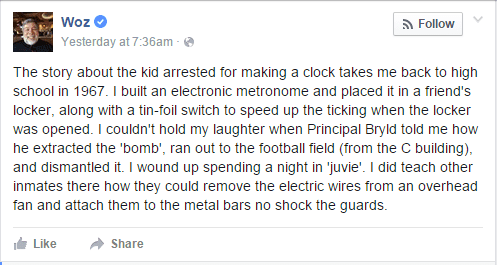 The real life incident from Woz’s life pertains to his school going days in 1967. He had built an electronic metronome and placed it in his friend’s locker, along with a tin-foil switch to speed up the ticking when the locker was opened.

However the contraption was discovered by his Principal. The principal thought it was a bomb and got it dismantled. Woz says, “I couldn’t hold my laughter when Principal Bryld told me how he extracted the ‘bomb’, ran out to the football field (from the C building), and dismantled it. I wound up spending a night in ‘juvie’. I did teach other inmates there how they could remove the electric wires from an overhead fan and attach them to the metal bars no shock the guards.”

Woz also defended Ahmed by saying that teen years are meant to be doing pranks.  Woz posted a reply to a query on Facebook, “Young pranks, for fun, even selling these blue boxes, were no indication that we’d be criminals as adults.” Woz added, “It was one incredibly exciting school year, to discover something nobody would believe was possible. Only a dull person could avoid that!”

Woz is also looking to meet 14 year old Ahmed Mohamed, teenager who got embroiled in unfortunate controversy and was arrested when his teachers mistook his contraption to be a ‘bomb.’

Meanwhile hackers from Dallas want to check the clock Ahmed made. Prominent members of the Dallas hacking and technology community have pledged their support for Ahmed. Mohamed has been officially invited to deliver a speech at the next Dallas Hackers Association meeting, and the group’s members are trying to help him access laboratories in the area that usually only allows adults, according to Vice Motherboard.

Ahmed who is in the cynosure of world media is reportedly leaving MacArthur High School , the school which made out his clock to be a bomb.

Ahmed is not going back to MacArthur — he’s transferring to another school, his father Mohamed Elhassan Mohamed said. The family has not yet picked a new school for Ahmed, he said, and is exploring options inside and outside of the country.

Irving Mayor, Beth Van Duyne, however, seemed to defend the school district and the police. “I do not fault the school or the police for looking into what they saw as a potential threat,” she said in a statement. They all followed procedures, she said. Van Duyne has had controversial interactions with Irving’s Muslim community, most notably when she supported a resolution that would prohibit “foreign law,” including Islamic or sharia law, CNN affiliate KTVT reported.