Mark Zuckerberg, the CEO of Facebook recently put up a live video giving users a behind-the-scenes glimpse of the new headquarters of the company. The 31-year-old billionaire entrepreneur was promoting a Q&A that he will be holding with Facebook users on Tuesday.

He used Facebook’s live streaming video feature, which is similar to the Periscope and Meerkat apps, but is currently restricted to celebrities and others with verified profiles.

On the roof of the building is a 3.6-hectare park with walking trails and outdoor space.

“The building itself is pretty simple and isn’t fancy,” Zuckerberg posted in March. “That’s on purpose. We want our space to feel like a work in progress. When you enter our buildings, we want you to feel how much left there is to be done in our mission to connect the world.” 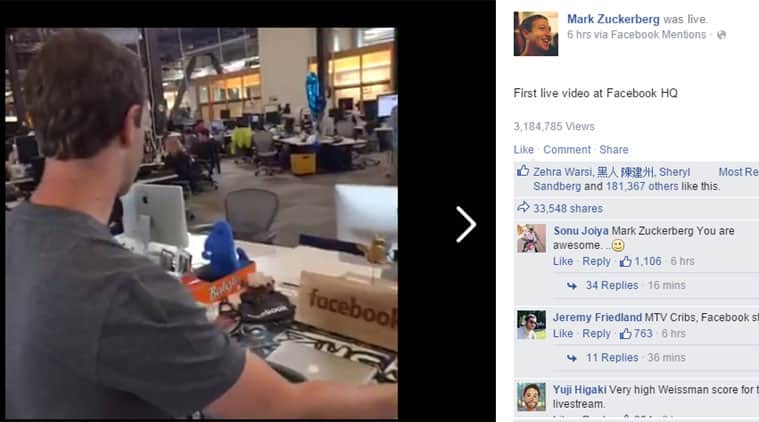 In the video, Zuckerberg exhibits as to how the new Facebook office is one giant open space with no special glass cabins for senior execs. What’s astounding is Zuckerberg himself does not have a separate cabin. Instead, his table is similar to the desk of any other employee and is in middle of all the action.

Zuckerberg’s own table is rather basic and filled with books and upcoming projects from Facebook, as shown in the video. The conference room is the only room with walls and they too are see through as they have glass walls. And why is that so?

The reason provided was that at Facebook, they believe that a giant collaborative space is better for working together, instead of giving people little cubicles and special rooms.

In the recent announcement made by Mark Zuckerberg, he said that Prime Minister Narendra Modi is scheduled to visit the headquarters of Facebook in California on September 27, where he will be having a town hall interaction with Zuckerberg.

The largest Facebook user base outside the U.S. is in India. The company had in June said that 125 million users of its global base of 1.44 billion come from India.

From the time, the livestream has been posted and gone viral, it has reached six million views in less than 24 hours.