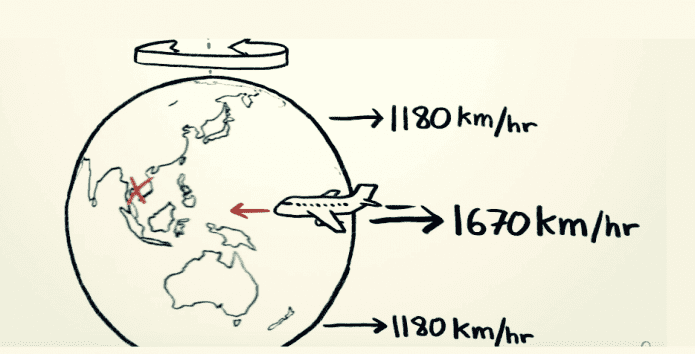 Watch the video : If Earth is spinning to the east, why isn’t it faster to fly west?

MinutePhysics, in their latest video explain the answer to the question “If Earth is spinning to the east, why isn’t it faster to fly west? “

Okay, time to stop everything and nut out a brain teaser: if Earth is spinning to the east at 1,180 km/h (733 mph), and we’re in a plane flying west, shouldn’t we get to our destination quicker, seeing as it’s literally spinning towards us? The short answer is no, because our plane is also affected by Earth’s spin, which means we’re spinning away from our destination while our destination is spinning towards us. Confused yet? Don’t worry, the latest episode of MinutePhysics has the slightly-less-short answer (it’s still MinutePhysics, after all) to this dizzying conundrum.

While Earth itself is spinning about 1,180 km/h to the east, the ground and everything on it are travelling even faster – at about 1,670 km/h (1,037 mph). Even the air above the ground is travelling at around this speed in an easterly direction. So for an aeroplane to get anywhere at all, it has to be moving relative to the ground.

“Yes, to go west, you go east – just slower than Earth is going east,” says Henry Reich in the video above. “Unless you’re within 10 or so miles of the poles, in which case a brisk westward walk will take you legitimately west.”

But it’s not so simple (we’re kidding – it was never simple), because winds in the upper atmosphere mess everything up. I’ll let MinutePhysics explain in the video above, but let’s just say it’s to do with different parts of Earth rotating at different speeds, because it’s a big, blue marble, and that’s what big blue marbles do when you spin them.

And if your brain seriously hasn’t had enough already, how about trying this one on for size: what would happen if everyone on Earth jumped at the same time?