Despite the fact that SSDs are becoming more popular thanks to their improved speeds and gradually reducing prices, they have yet to reach the same capacity as mechanical hard drives. That being said, Seagate introduced its first helium-filled hard disk drive that features a form factor of 3.5 inches and has been designed to facilitate the high-capacity storage needs of cloud datacenters. Since it is filled with helium, such hard drives will not only have increased storage, but increased reliability as well, and reduced power consumption also plays a huge role in reducing the overheads for these datacenters.

Currently, there are two major clients of the company who are currently evaluating these storage drives, with shipment of the helium filled storage mediums to commence later in the year. Seagate has incorporated seven perpendicular magnetic recording (PMR) platters that possess a capacity of 1.43TB. According to the company, its latest storage product will also have advanced caching sub-system in order to increase performance, but we still know that they will remain behind the sequential and random read/write speeds of solid state drives. 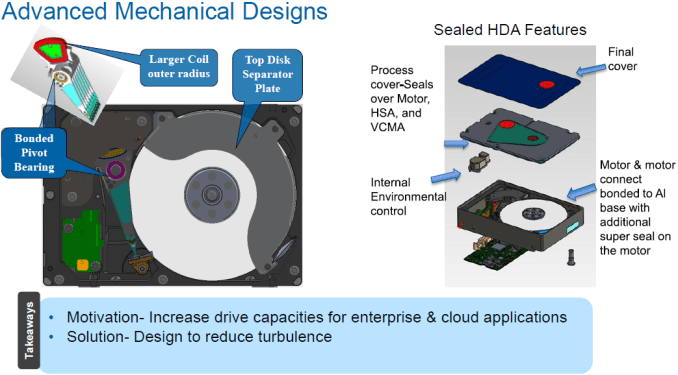 In addition, such hard drives also possess 2.5 million hours MTBF (mean time before fail) for its helium-filled HDD, which is significantly higher compared to traditional enterprise-class drives. While traditional mechanical hard drives possess an RPM of 7200, Seagate has currently not stated any such details regarding its latest hard drive, although we are certain that it will be running at the same speed in order to maintain a balance between performance and power consumption.

The 10TB hard will either use the SATA 6Gb/s or SAS 12Gb/s interface, making them compatible with a wide of computer systems, including those belonging to regular consumers. However, pricing details of the hard drive are yet to be detailed by Seagate, and such a high capacity storage medium that delivers both performance and efficiency will obviously not be going cheap. Additionally, Seagate has yet to confirm if it plans on producing laptop form factor hard drives, which belong to the 2.5 inch form factor category. However, we strongly believe that such hard drives will carry smaller capacities because it will become relatively difficult for the company to incorporate large storage platters in a smaller form factor.