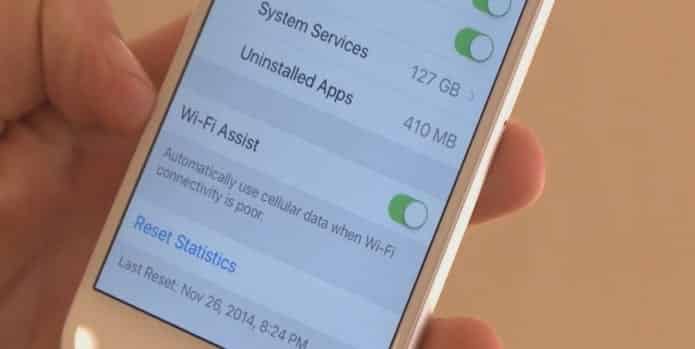 You can incur huge phone bills due to data overages. This San Francisco teen learned it the hard way when he got a bill of more than $2,000 for using 144GB of monthly data on his iPhone that had Wi-Fi Assist enabled, a new feature on Apple iPhones.

Wi-Fi Assist is a feature on iOS 9 that automatically switches an iPhone user from a Wi-Fi hook up to a cellular connection if the Wi-Fi signal becomes weak. Many iPhone users have unknowingly used all their monthly data and have been hit with overage charges because of Wi-Fi Assist, as it is enabled by default.

In the case of Ashton Finegold, the teen received a text saying that he was nearing his monthly data limit.

“It just said maybe 65 percent of your data has been used,” said Feingold.

However, he thought it was okay, as he was using Wi-Fi in his room. But the teen was shocked when he received a phone bill totaling $2,021.07.

“I thought my dad was going to kill me,” he told CBS News.

“I had no idea what that was,” he added.

As it turned out, the huge bill wasn’t totally Ashton’s fault. It turns out Finegold’s bedroom is one such place with a weak signal. All the time that he thought he was connected to a Wi-Fi signal, the teenager’s iPhone was using Wi-Fi Assist to connect to his carrier’s cellular network. This meant that every video he watched or song he listened to through his phone while in his room went right to his monthly data limits.

Mike Campbell of Apple Insider, a website for news and rumors about the company, told CBS News that while some customers like the feature, many don’t know they have it.

“It comes by default — it is switched on. That’s why there’s an uproar,” Campbell said.

Apple did not respond to a request for comment by CBS News.

This isn’t the first time Apple has been in hot water over this feature. The $5 million lawsuit was filed by a California couple who was unknowingly using data and accruing exorbitant charges.

Apple has offered some details about Wi-Fi Assist on a support page, explaining how to turn the program on or off.

You can turn off the Wi-Fi Assist feature by going to Settings > Cellular, then scroll down to the bottom and toggle Wi-Fi Assist to “Off.”

Apple also writes that the system will not switch to cellular data if a customer is data roaming, and will only work for apps that are actively running.

It won’t switch over for content that is downloading in the background, or with certain third-party apps that use large amounts of data.