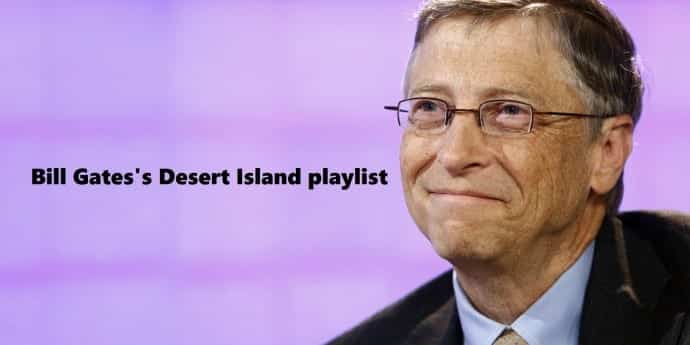 Bill Gates was asked to choose the 8 records he’d take with him to a desert island, here are his choices

If you were stranded on a desert island, which eight unmissable pieces of music would you want to take with you?

That’s what the BBC asked Gates.

The program invites guests to select the eight records they would take with them were they to be cast away on a desert island.

Talking to Kirsty Young on Radio 4’s “Desert Island Discs,” Gates shared his list in a rare personal interview. He goes through his musical choices, explaining their links to the people and the moments that changed his life.

The castaways also choose a book and a luxury item.

Here’s are the records, book, and luxury item that Gates selected and why.

“Under Pressure,” David Bowie and Queen
Gates said: “In my 20s and 30s I worked a lot, but a few Fridays and Saturdays we’d go out and dance, so this kind of reminds me of those disco days with a bit of weekend freedom.”

In the early years of Microsoft, he took little time off and didn’t go in for vacations, Young heard. Gates said he knew he should be careful not to judge fellow workers by his own standards.

“I knew everybody’s license plate so I could look out the parking lot and see, you know, when people come in. Eventually, I had to loosen up, as the company got to a reasonable size.”

“Blue Skies,” Willie Nelson
This was his favorite of the picks said Gates. He surprised her the night before his wedding to Melinda with a special performance from Nelson on a beach in Hawaii.

“My wife Melinda and I love Willie Nelson. So as a surprise gift for her, I had him show up the night before we got married. We were on a beach in Hawaii, and he kind of walked down the beach with his guitar, and I said, ‘Well, here he is, let’s have this guy sing some songs for us.’”

“Sing,” Ed Sheeran
This is a favorite of Gates’ 13-year-old daughter Phoebe.

“Are You Experienced,” Jimi Hendrix
Paul Allen, who had gone to the same high school as Gates, was the other co-founder of Microsoft. Gates said of this song: “Because I was younger [Paul Allen], would sometimes taunt me with the title of this song — “Are You Experienced” — because I hadn’t gotten drunk or other various things, so this is one of our favorites.”

“One,” U2
Gates said: “When the [Bill & Melinda Gates] Foundation was just getting started around 2000, Paul [Allen] told me that I should meet Bono. And I didn’t prioritize it because I thought a musician is not really going to understand this global health stuff. But we finally did get to meet and I was amazing about he had thought about it, read about it, so it started a partnership, and he’s been absolutely amazing.”

“Two of Us,” The Beatles
The Beatles track reminds Gates of arch-rival Steve Jobs, whose company Apple Inc. battled it out with Microsoft for dominance in the personal computer market.

Gates said he chose this song because Jobs mentioned it when the two famously gave a joint interview not long before the Apple founder’s death.

“Steve was really into music, and he loved the Beatles, and so did I. And he actually mentioned the song, ‘Two of Us,’ saying that was kind of like this journey we’d been on where we’d been competing and working together.”

“My Shot,” from “Hamilton”
Currently on Broadway, Gates said this song appealed because: “It’s about a young person saying, ‘Hey, I’m going to take a risk. I’m going to get out there and try and do something new and different.’”

His choice of book was: “The Better Angels of Our Nature” by Steven Pinker

In his analysis, Pinker, a Harvard professor of psychology, argues that over the centuries, people have gradually become much more humane, as the civilizing effect of manners, regard for others and self-restraint takes effect.

In a blog post on his favorite reads of 2012, Gates says the nonfiction is “one of the most important books I’ve read—not just this year, but ever.”

Gates selected the Collection of Lectures DVD from The Learning Company as his luxury item. He said “I suppose asking for an Internet connection is outside the rules.”