It had been two years from the time Brian had left Yahoo! working as an early employee for 11 years. However, it was his past and he had been wrecked thinking about it.

He had sprung from job to job in Silicon Valley’s start-up land, and now he had been rejected by both
Facebook and Twitter, from where he had tweeted few months prior.

It feels like you are being pushed out the door when you are nearing the dreaded age of 40.

However, the most striking part about Brian’s struggle is the good grace and positivity with which he handled his rejection — “It was a great opportunity to connect with some fantastic people. Looking forward to life’s next adventure.” 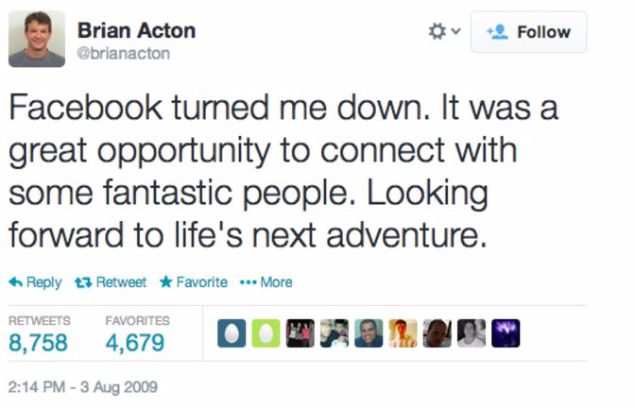 The hurt emits from those 140 characters and also strength of character.

So, Brian stuck with it and landed up with a job with an old colleague from Yahoo! — somebody he had hired, actually.

While it was not much, he got the grand title of ‘Co-Founder’ and no salary for his efforts, which eventually paid off.

A few years later, Brian and his co-founder at WhatsApp sold their company to Facebook for $19 billion, with a ‘b’, making Brian’s stake worth some $4 billion. Again… with a ‘b’ that indicates the significance of not giving up. Even if you’re “too old” or “past your prime” or “washed up”.

The point the story wants to direct is that one would never know what’s going to happen unless that person quits trying.

If you quit trying, you can guarantee that all of your fears will come true — you’ll be forgotten, you’ll be passed by, and you won’t get the next great opportunity.

But if you keep trying, good things can happen.

If you keep trying, something will come your way.

If you keep trying, sooner or later, the odds pile up in your favor, and you will earn that lucky break.

And while it may not have the wonderful poetic justice of being rejected for a 6-figure job only to get a 10-figure payout four years later, standing by it will give you the happiness of giving yourself the respect, and the opportunity, that you are worthy of.