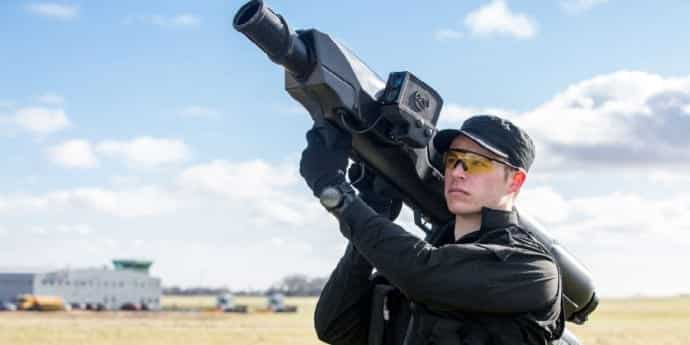 A few days ago, an ammo company had announced shotgun shells specifically designed for taking drones out of the sky. Now another company called Openworks Engineering has unveiled a bazooka that will bring down drones without destroying them.

The new Skywall 100 bazooka fires a smart projectile with a net that captures a drone and drags it to the earth. The bazooka’s net-carrying projectiles can reach drones within a range of up to 100 metres. Reload time is about eight seconds. The parachute feature which comes with the projectile, ensures that drones would not just plummet to the ground but glide gently to the ground.

Skywall’s accuracy relies on a laser-powered “SmartScope,” which allows the gun’s on-board computer to calculate exactly the right moment to fire the projectile. The projectile itself keeps in constant communication with the gun, and does not unleash the net until it is close enough to the drone.

“The smart-projectile is not just a bullet with a net,” OpenWorks technical director Alex Wilkinson told Ars Technica. “The SmartScope in the launcher is constantly updating the projectile as it tracks the target. Once in the air the projectile counts down until it is near to the target, at which point, rather than just ‘detonating,’ it performs a carefully timed sequence of actions in order to ensure the net is deployed as it passes the target drone.”

“This means that you don’t have to hit the drone on the nose, but you just have to be in the general area around it,” he added.

OpenWorks says that SkyWall 100 will be available to buyers later this year. The company is also working on a larger gun mounted on a three-pronged frame and a permanent machine gun-like ordnance.